What Do They Get Me? 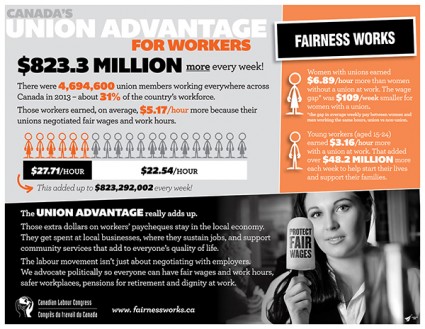 One of the first questions people ask when they start working in a unionized workplace is, “how much am I going to pay in union dues?” It’s a fair question. After all, why wouldn’t we want to know what it’s going to cost? We’ll get to that, but another important question to ask is, “what do I get for my union dues?”

Recently, the Canadian Labour Congress (CLC) compared workers’ wages between union and non-union jobs. Not surprisingly they found a vast difference in wages and other important benefits between the two. On the CLC’s website, they state that, “on average, unionized workers across Canada earn $5.17/hour more than non-union workers, that women with unions earn more ($6.89/hour) and get paid more fairly, and that young workers (aged 14 to 24) earn more when they work under the protection of a collective agreement.”

It’s important to understand that these higher wages don’t just benefit the people receiving them. They benefit entire communities because that money is being spent within those communities and being put back into the economy through taxes and support of local business.

And unions don’t just raise standards for their members; they set the bar higher for all workers, not just those who belong to the union.

We are an Alberta Local union.  Statistics for Alberta are equally impressive.