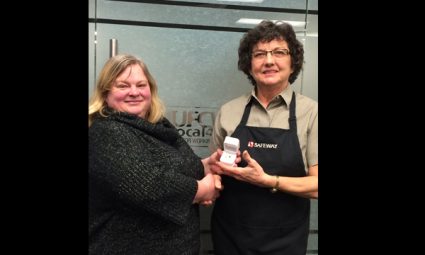 Barbara has been a Cashier, Red Jacket Front End Coordinator, worked the magazines and did some File Maintenance department, finishing off as a Customer Service Office part-time worker.

Working in several different stores during her Safeway career, Barbara finished her 30th year at the University Sobeys West Garneau store.  She very much misses her friends, neighbours and familiar faces at the store.

Though she continues to be employed full-time with the government, she says she misses the socialization and physical activity associated with Safeway.

She enjoys bicycling and gardening. Her husband, Glenn would like to snow bird out of the ice and snow to a desert location like Arizona or Peru.  Barbara has also joined 2 community gardens to volunteer to produce food for those in need as well as volunteering for Edmonton’s annual Folk Fest.

Barbara has 3 sons and is waiting to become busy with grandchildren to spend her days in retirement with.

While Barbara wishes to thank UFCW 401 for being there with support and for all the help through the years, we too wish to extend our heartfelt thanks to her for support of her union and her membership over 3 decades.  Congratulations, Barbara!  We wish you all the best.