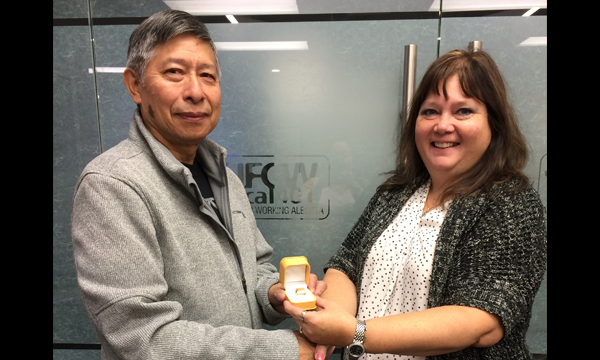 Fredy with his union rep Cheryl

Congratulations to Fredy on his recent retirement after 14 years at McKesson Canada.

In his time at McKesson, Fredy was a very versatile worker, having worked in numerous different areas throughout the warehouse he also proudly supported and walked his picketline with his coworkers during the 2010 strike.

In his retirement he plans to fulfill a lifelong dream by taking his entire family, including his grandchildren, back home to Peru and enjoy the visit of a lifetime with his loved ones.

He tells us he also really enjoys cooking and in fact is a chef, so we’re sure that he will be delighting everyone as he dabbles in the culinary arts now that he’ll have the time. He has one lucky family!

“I have always been a union person”, he says.

Freddy’s been a member of the laborers Union, the Carpenters Union, and has always been a proud union member no matter where he’s worked.

“The union has always helped me deal with employers because employers aren’t always willing to work with the people”, he observes.

We are very thankful for your membership in our great union, Fredy, and we wish you nothing but wonderful things in your retirement. Keep in touch!

Fredy with his union rep Cheryl