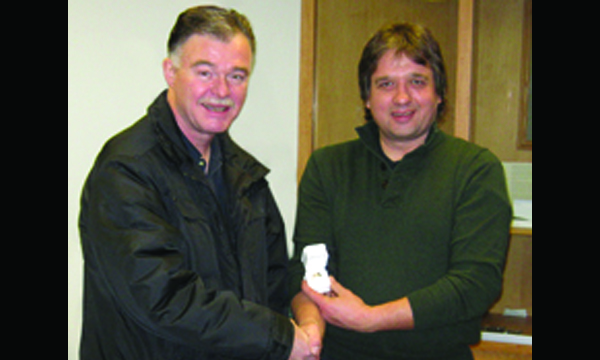 Geoff (L) receives his ring from his union rep Rick

Geoff spent 36 years at the Safeway warehouse in Edmonton after starting his employment in 1976. During those years he worked in a number of different areas of the operation, starting in the frozen food warehouse as an assembler. In 2007 he transferred to maintenance and remained there until the closure of the frozen foods warehouse in 2012.

During his time, he says he “saw a lot of managers come and go” and always appreciated working in a unionized workplace and was particularly grateful to UFCW in the times he needed us to help smooth out workplace issues due to some health issues.

Geoff officially retired September 21, 2012 and plans to travel back east where his roots are, in Toronto. He plans to spend time with his granddaughter and has plans to take his 2 daughters to Europe in the near future. As for fun and travel for himself, he hopes to visit Vegas as often as possible!

Geoff wanted to wish all at UFCW and his former workplace all the best and we at Local 401 wish the same for him. Congratulations on your retirement, Geoff. May you have many long and healthy years to enjoy family and friends with.

Geoff (L) receives his ring from his union rep Rick