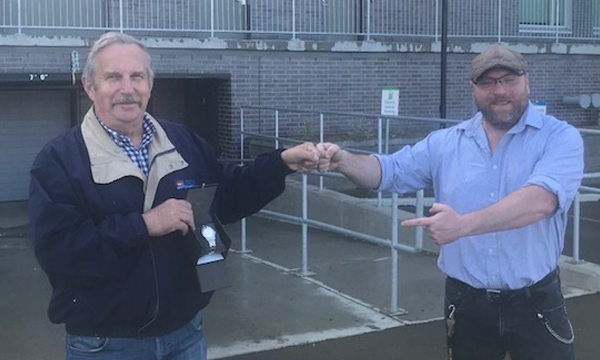 After 44 years at Safeway in Fort McMurray, Randy is ready for retirement and to head back home to Newfoundland.

“I came to Fort McMurray from Stephenville, Newfoundland and Labrador in June of 1977 and started working in the meat department. The meat manager hired me on the spot and I never looked back,” Randy recalls.

Randy comes from a large family and started working very young, helping out in the family business stocking groceries and produce. A couple years after moving to Fort McMurray he met his wife Sharon. They found out they were from the same home town and lived just a few blocks away from each other. Happily married for 40 years, he says they have two beautiful and very smart daughters who now live in Edmonton.

Upon starting work at Safeway, Randy became a member of UFCW 1118. A few years later he was elected to the Executive Board. Always fighting for equity and fairness, Randy shares one of his proudest moments as a father and activist.

“I remember one May, my daughters planned to walk in the May Day parade on Whyte Ave. and they asked me to walk with them,” he remembers. “It was a very proud day for me, indeed.”

Not only was Randy active in his union, he also volunteered for the Safeway Employee Association (SEA), which is a group of employees dedicated to organizing annual and regular functions and fundraisers. He also worked on the Because We Care committee, raising funds for charity. Additionally, he also worked as a Relief Union Representative from time to time over the years.

“One of my best moments while working as a relief rep was when I helped a member deal with a difficult store manager. That member later died from cancer and his brother told me that he talked about how much I had helped him. I never thought of that encounter as life changing, but to him it was. His brother said he talked about me quite often. It’s one small event that has brought a smile to my face every time I think about him. To know that my actions had made his life a little more enjoyable says a lot.”

Asked if he has any parting words before heading back to Newfoundland with his beloved wife, Randy offered some kind and thoughtful words.

“I would like to thank the union for their help in teaching me to be a better listener and providing me with the tools to help my fellow members – it is something that I will carry on all my life.”

Congratulations, Randy. May you have a wonderful, healthy, happy, and long retirement. Thank you for your dedication and service to working people, their families, and our community.