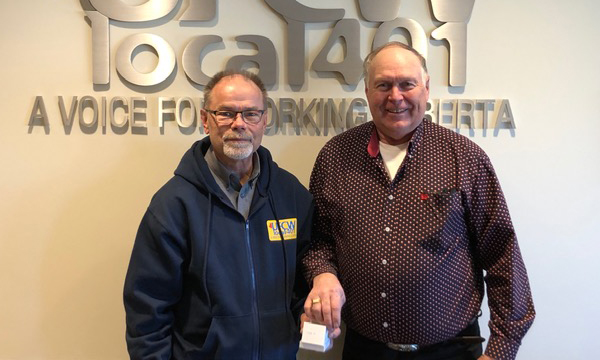 Congratulations to Richard on his retirement from the Cochrane Safeway after 29 years with the company in both the produce and grocery departments.

Having worked in Calgary from 1971-1985, leaving Safeway for a few years, and then moving to the Cochrane store in 2004 until his retirement this year, Richard was an active union member and workplace leader.  He served in many roles over the years; the union bargaining committee, Shop Steward, and assisted with and attended numerous union events and fundraisers.

Now that his time is his own, Richard plans on travelling and spending time with his show horses.  He welcomed his first grandchild in May and plans to spend time with loved ones, new and old!

“I grew so much in life working with this union,” he proclaims fondly.

We are so grateful to have had your dedication and leadership, Richard.  We wish you nothing but happiness and health in a long and fruitful retirement.