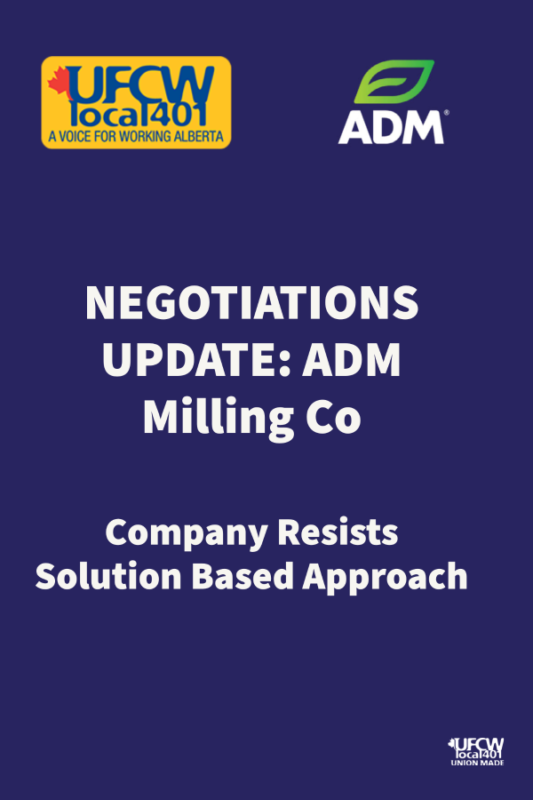 February 13, 2021 – Calgary, AB – The last 10 months of living under the threat of a global pandemic have been life changing, not only for our society, but for the members and for your union as a whole. Phrases like “social/physical distancing” have entered our vocabulary and the use of masks and barriers are now commonplace in our work spaces and in our everyday lives. We have had to adapt to these changes the best that we can in an effort to protect the health and safety of everyone.

While some workplaces have largely escaped the reality of an outbreak, others have not been so lucky. Your union has had to deal with outbreaks at dozens of UFCW workplaces across the province, and we bear the unfortunate burden of having the largest single site outbreak in Canada at Cargill Foods in High River. We have thousands of member quarantined, hundreds of members who have been infected and at least 4 members who have passed away due to this virus. It is through this lens that we as an organization have had to re-examine how businesses and your union operates in order to ensure that the language in all union contracts, protects the health, safety, well-being and livelihood of all Local 401 members.

A bit of history

The history between ADM and UFCW has not always been good. 10 years ago, there was a lockout by the employer and the past rounds of bargaining have been tough to say the least. We do not believe that this history is something that needs to continue. Over the last few years there have been a number of changes with both ADM and UFCW and we all have some new faces at the table. The union also has a new leadership team with President Thomas Hesse and Secretary Treasurer Richelle Stewart. It is our hope that these changes will help bring a new era in our relationship and assist both parties in working together going forward.

Over the last several months, your bargaining committee has been working hard to listen to your concerns and suggestions for changes and improvements that you would like to see in a new union contract. We would like to thank all of you who participated in this process. Your committee took all of these ideas and translated them into a comprehensive proposal package that you can request through your union representatives.

As you can see, there are some proposals that address specific issues while others request a thorough discussion on areas that you have raised as problems. This allows us to bring up all the concerns with Collective Agreement articles with a view that discussions will lead to a mutually agreeable solution that could be captured in a new contract.

Your bargaining committee held its first meeting with the company this past week, February 10-12, to exchange proposals and begin discussions.

The company’s chief spokesperson is not the same one that has handled the previous contract talks. They have been with ADM for 38 years and even helped bargain an agreement in Calgary over 20 years ago. The tone of bargaining was better, and company representatives seem to be willing to listen to your concerns. The company even put forward a proposal package that was very small and does not seem to be seeking concessions from the members. Those matters, in and of itself, would be a vast improvement. Please ask your union representatives for a copy of the company’s proposals.

A tough road ahead

The unfortunate aspect of the first session was that while the company seemed willing to listen to all the concerns, we were very disappointed to learn that there was an unwillingness to address any of them. For the vast majority of your concerns, they did not offer any counter proposals on ways to fix the problems that were brought up. They would either suggest that while you had issues, they did not, or they would simply say no. There were only a small number of concerns that the company said they would look into, and after 2 days we were only able to agree on 2 minor issues.

Based on the company’s response so far, it appears this is going to be a very tough set of bargaining and we must all prepare ourselves for that.

Your issues are very important to us and we are going to do everything that we can to ensure your voice is heard and that you achieve a new contract that addresses your issues, but we cannot do it alone.  We are going to need your strength and your support to get us there.

United we bargain, divided we beg!