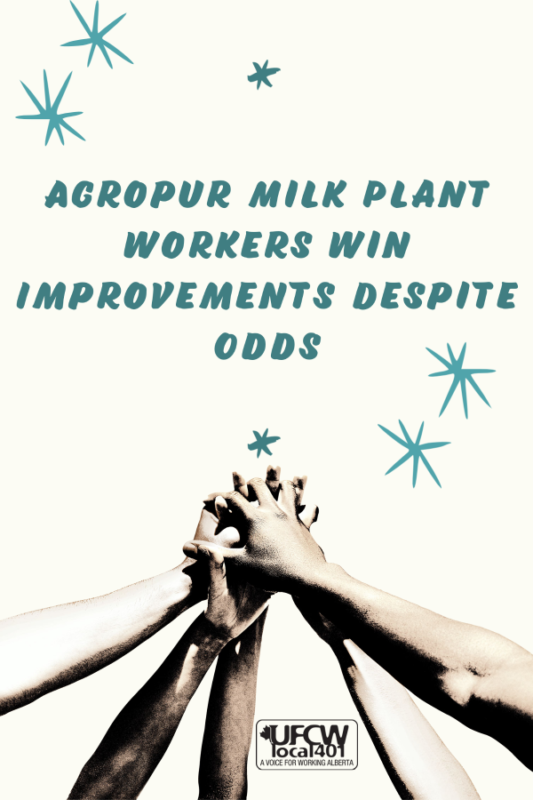 March 9, 2021 – Edmonton, AB – Earlier this year, company officials at Edmonton’s Agropur Milk Plant notified union negotiators that they were seeking an extension to the current Collective Agreement. Often this means the employer is looking for relief at the expense of their employees. Agropur was looking for a quick round of negotiations, and a ratification before February 5th. They were also offering very little in the way of wage increases and nothing for improvements to other areas of the Collective Agreement in exchange for a 5-year extension agreement.

Agropur Milk Plant workers stood together, however, and after rejecting the first company offer, they secured a much improved second offer. They have since voted in favour of ratifying their new five-year collective agreement extension by 77%.

“We were able to leverage the company’s motivation and turn that into a decent contract after several late bargaining sessions, and one failed ratification vote,” lead negotiator Lee Clarke tells us.

Highlights of the deal include improved health and safety protections relating to COVID, protections against mandatory vaccinations, improved vacation and leave of absence language, extensions to grievance time limits, reductions in how long discipline stays on an employee’s file, along with guarantees of creating seven new full-time jobs for existing part-time employees.

A few other highlights include 10.25% wage increases over the term of the five-year deal, increases to night shift premium, increased boot allowance, additional rest periods on a ten-hour shift, a signing bonus of $500.00 for each employee, and increased education fund contributions for union members. Also, significant gains were made relating to overtime. Now, when the company asks employees to work overtime and later cancels that overtime, employees will now be paid for the overtime assignment.

Congratulations to the union’s negotiating committee. They did a great job fighting for every worker in the plant and we tip our hat to the entire membership for sticking to their demands for a fair and much improved union contract!