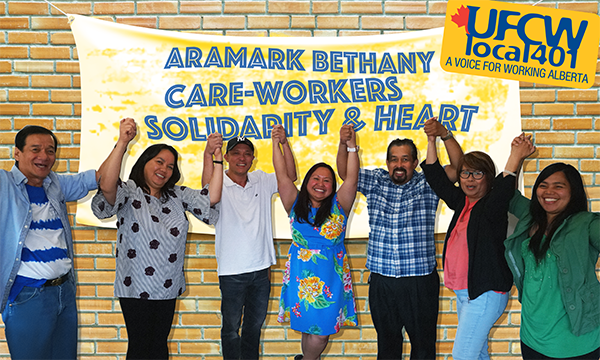 Aramark has the money but we have the heart!

Employees who work at Aramark have unionized! That means they get to go and negotiate with Aramark bosses on June 19th and 20th. Union activist employees from Bethany were accompanied by professional union negotiators and went to union negotiation meetings with Aramark Management. They were very excited! They joined together in solidarity to tell Aramark bosses that wages, benefits, and working conditions need to improve. The law requires that Aramark management negotiate with your union. Before unionizing Aramark employees had to do what they were told or quit. Now, Aramark employees have solidarity and can express their real feelings from their heart without fear.

In the picture above you can see your fellow employees that attended negotiations. In the photo they are joined by UFCW Local 401 Union Organizer and representative Catherine Lelis. For those whose first language is Tagalog Catherine was there to to help guide them through the process.

The bargaining team members are from left to right:

Union representatives identify more than twenty issues that Aramark needs to fix in their workplace. 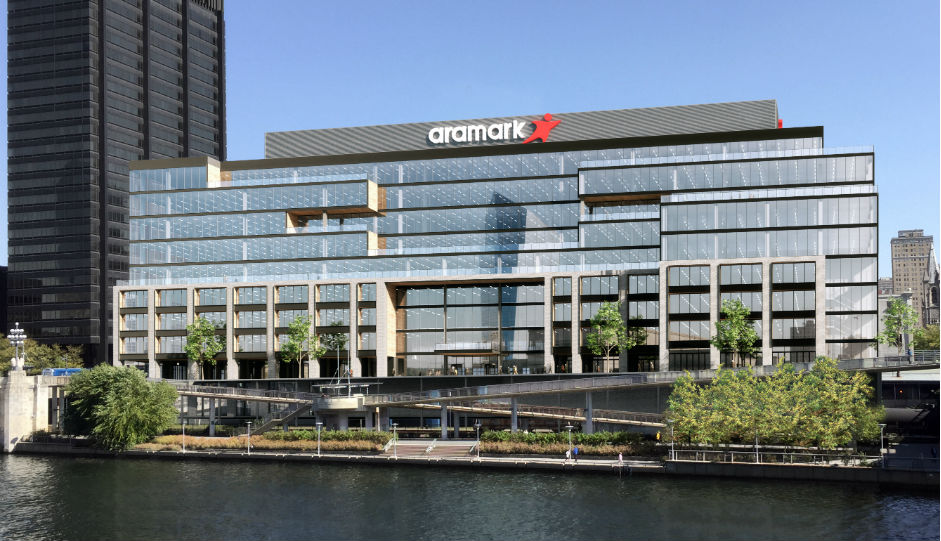 Also Aramark is building a brand new waterfront headquarters in Philadelphia. Aramarkâ€™s space will include a “state of the art” employee dining facility, fitness centre and 8,000 square feet of exterior terraces.

Yet wages and benefits at Bethany suck. Workloads are excessive and employees are not treated with dignity and respect. The company admits that manager Mike Quiano was careless about important privacy issues and privacy law. But he was not fired. Instead a worker was fired for simply being curious about some documents that Mike failed to secure. Instead of speaking to the employee he was punished severely. Unfortunately, he did not have a union yet through the protection of a union contract. If Aramark was a compassionate employer that was fair and even handed the worker would not have lost his job. When questioned about this at the negotiations table the employers response was cold. Aramark employees are asked everyday to be compassionate to, and kind with vulnerable residents.

Why can’t Aramark bosses be compassionate with, and kind to their hard working staff?

The company was represented at the bargaining table by Steven Leonoff – National Director of Labour Relations for Aramark. He travelled from Toronto to attend the meetings. He seemed to be a decent listener and had a fairly even tone. We are worried however because the company does not even seem to be well versed with what happens in their own business. They could not even explain what the companies policy was with respect to uniforms with the staff.

The union arrived at bargaining fully prepared and ready to offer and explain it’s contract proposals. The company was not prepared and tried to suggest that it should not have to advance proposals. The company is required by law to respect the union in Canada. Other employees at Bethany are members of the Alberta Union of Provincial Employees. Aramark employees are now represented by UFCW, a specialty union that represents employees that do the work that you do. Aramark said that they are prepared to negotiate an agreement with UFCW. At the beginning they tried to engage in some manipulation to try to avoid giving better wages and benefits through a union. Aramark tried this at the University of Calgary but the union was to strong. Their, unionized employees that provide food services work now have an awesome plan that costs them nothing!

Aramark is a big money company that can afford to treat you better. They have the money but unionized workers have solidarity and heart. Having solidarity and heart always works. Stick together because if you do things are going to get better at Aramark.