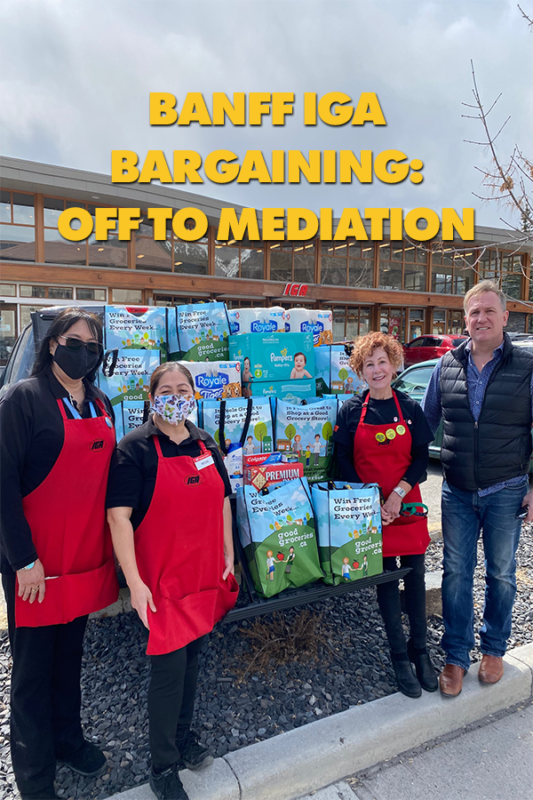 Banff IGA Bargaining: Off to mediation

We have mediation scheduled next week on Monday and Tuesday. Hopefully, the company will arrive at mediation and present a better offer than before when they had walked away from the table in February. For more information on the mediation process, check out this short video.

We still have some non-monetary items that they need to agree with in addition to a better financial offer. We need to get some agreement on those items quickly.

Inflation is spiking at near-record levels. You may have heard on the news that in Ontario, British Columbia, and other provinces, workers have been asking for another increase in the minimum wage. Many community agency groups, backed up by economic data related to poverty levels, project that the minimum needs to be increased to about $18 to $20 an hour, depending on where you live. Banff is on the high end of that spectrum because of the enormous cost of living in the Bow Valley. We shall be stressing that point when we enter mediation next week.

As many of you recall, we did a survey after our meetings in Banff on April 6 asking whether you would be willing to go on strike and picket the store should you not receive a fair and decent contract offer that satisfied you. An overwhelming number of members said that they would be willing to take that step to ensure they had a contract they could accept. This demonstration of solidarity will help us greatly at the bargaining table.

We’re also proud to report that our commitment to our community is as strong as ever. As a labour rights organization that also focuses on community action and social justice, President Thomas Hesse and Secretary-Treasurer Richelle Stewart recently approved a donation to the Banff Food Bank to help families in the community who are struggling. Local 401’s Executive Director Chris O’Halloran, Bargaining Committee members Joni Ferguson, Valerie Watch, and Chief Negotiator David Smith visited the Banff IGA to deliver those donations to the hamper and check in with the members. Check out some of the pictures from the visit below.

Stand together, stand strong and wear your button!