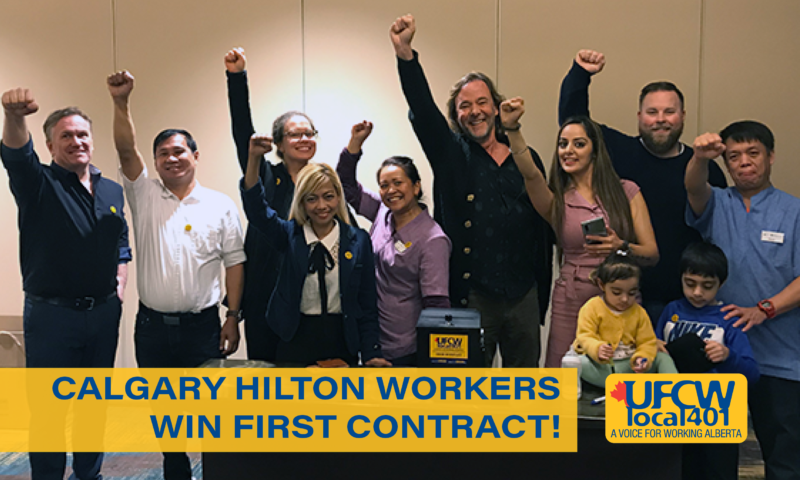 Calgary, AB – January 27, 2020 – Workers at the Hilton Garden Inn and Homewood Suites in downtown Calgary strongly endorsed their union on Friday, voting 84% in favour of their first union contract with the United Food and Commercial Workers (UFCW) Local 401. The vote came nearly two years after the Alberta Labour Relations Board directed that a union be certified at the hotel after previous management broke the law by firing an employee for their support of unionization.

“This is an important symbol for Alberta hotel workers who might want to unionize,” said UFCW Local 401 Secretary Treasurer, Richelle Stewart. “If you want to form a union, we will help you do that. And if you do, even though it is a risk when employers break the law, we still will do everything in our power to ensure you get a dignified first union contract.”

In May 2017, the Alberta government enacted the Fair and Family-Friendly Workplace Act in an effort to bring balance to labour laws that had not kept up with other provinces over four decades of conservative and pro-employer governments. Among other things, these changes allowed the Alberta Labour Relations Board to make judgements against employers who interfere with workers seeking to form a union. These remedies include such penalties as ordered unionization (known as a directed certification) for such violations.

That same summer, Hilton employees began discussing forming a union after management made sudden changes to their working conditions. One worker, Aaron Doncaster, reached out to UFCW Local 401 for help.

“We were experiencing lots of unfair treatment, and favouritism was the norm. There were issues like incorrect pay on overtime and tip calculations, safety anxieties, and a general lack of respect from our managers,” said Doncaster.

Shortly after the campaign began, management fired Doncaster, a tactic commonly intended to discourage others from further organizing activities.

UFCW Local 401 immediately made a complaint on Doncaster’s behalf to the Alberta Labour Relations Board, presenting evidence that Doncaster was illegally fired for being a union supporter. The Labour Board ruled against the employer, and Doncaster was offered his job back and with compensation. For the other workers who were now fearful of continuing with their union campaign, the Labour Board ordered the first directed certification in Alberta in over 30 years. They were granted their right to a union automatically.

For nearly two years, Hilton employees worked hard to secure a fair first contract at the hotel. They sought the assistance of a mediator and persevered through a change in ownership at the hotel. The latter development seemed to turn the tide, and last week, the union and management reached a deal.

Some of the details of the first agreement include:

Perhaps most importantly, the first contract solidifies for Hilton employees the protections of having a union in their workplace.

“I want to especially thank our member-led bargaining committee, who stayed strong through almost two years of bargaining,” said UFCW Local 401 negotiator, David Smith. “They pulled together and worked incredibly hard, reaching out to all of their co-workers about the contract and issues on the table. We helped out, but these amazing people are entirely responsible for this sensational result.”

“As a union, we are committed to member-driven and transparent negotiations,” said UFCW Local 401 President, Thomas Hesse. “That practice is what enables people to fight their own fights, with a union by their side, and win on their own terms. This is a spectacular example for all working Albertans who are seeking and deserve a better life.” 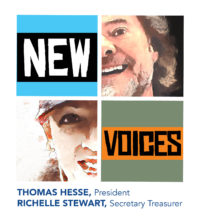