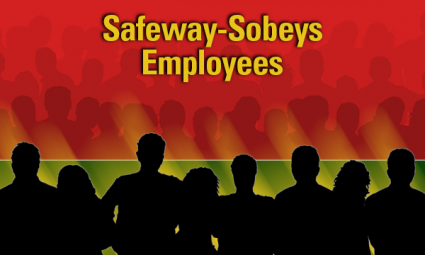 Safeway/Sobeys – Should prepare for a strike vote

Some Progress Made, But Safeway Members Should Prepare for a Strike Vote in March

The Safeway negotiating committee’s challenges with the Company continued into our second round of January negotiations from January 19-23. The earlier portions of the week were extraordinarily frustrating as the Company dragged its feet and refused to give the committee any substantial proposals to consider.

Progress was so stifled that Secretary Treasurer and Lead Negotiator Theresa McLaren, Union Negotiator Al Olinek, and committee members began to openly question the Company’s commitment to achieving a Contract in a timely fashion.

On the morning of Wednesday, January 21, Union President Doug O’Halloran attended negotiations and put the situation in stark terms for the Company, noting that Safeway employees are strong union members who are not afraid to fight for what they deserve.

“These are the people who make your business successful,” President O’Halloran noted, “why would you put them through this sort of treatment?”

Members of the committee also had an opportunity to address the Company, speaking about the feelings of neglect that Safeway workers have experienced since the purchase of Canada Safeway by Sobeys Inc.

“Some of the people at this table have been here for a long time,” one committee member said. “We remember when the Company came to us asking for concessions, claiming they were necessary and promising to take care of us when times were good. You broke that promise and we won’t be fooled again. This company owes us.”

The open dialogue with the Company seemed to do some good as negotiations picked up speed at the end of the week. The committee and the Company were able to either withdraw or agree to 24 non-monetary items by week’s end, including a few contentious issues that had been holding up discussions. The progress leaves 53 items outstanding.

Two of those outstanding items are the major concessions the Company is seeking: allowing vendors to stock shelves and removing Department Managers from the union. These concessions will severely impact hours in the stores and adversely affect Safeway members’ quality of life.

On those items, President O’Halloran informed the Company flatly, “You’re not getting those concessions without a strike. Safeway members will hit the streets over these issues.”

While some good progress was made in the last two days of negotiations, the likelihood of a strike vote is even stronger than before. Unfortunately, committee members recognize that it is becoming standard practice for the Company to stall until the union forces their hand with a strong strike vote.

Safeway members need to be ready to show the Company that they mean business and will not give in to concessions that will erode their contract.

Secretary Treasurer McLaren put the Company on notice that the committee expected them to table a full wage package for consideration at the February 9-13 negotiations in Calgary.

Barring very clear progress, the committee will be asking the mediator to “write out” at the February negotiations so that the union can take a strike vote.

For those not familiar with the term “write out”, it means that the union has come to the conclusion that the mediator has not been successful in enabling negotiations to progress. In Alberta, mediators do not have the authority to compel a company like Safeway/Sobeys to do anything.

Asking a mediator to “write out” simply means that the Company remains unwilling to negotiate fairly and that we need the mediator to leave the process so that we can move to the next step of negotiations by taking a strike vote and giving the members an opportunity to have their say.

Having the mediator leave the process does not mean that the union does not want to make a deal – in fact, it’s quite the opposite. The union is just trying to get to the point where issues can be brought to a head so that Local 401 members can take control of decisions about their future.

“These negotiations are shaping up in one of two ways,” Secretary Treasurer McLaren said. “Either we’ll spend the first two weeks of March presenting Safeway members with an offer, or we’ll spend them taking a strike vote. Which way we go is up to the Company.”

We will keep Safeway members updated on the state of negotiations as discussions continue, but they should begin preparing for the likelihood of a strike vote in March.

Remember: we can win the contract that Safeway members deserve by bargaining strong together!

In the meantime, if Safeway members have any questions, they should contact their full-time Union Representative.