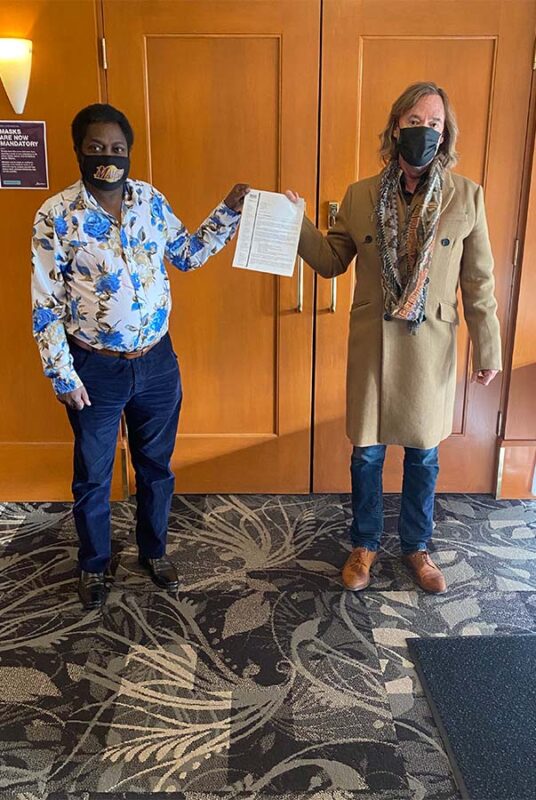 “They’re big and they’re bad, but we are not afraid.” – President Thomas Hesse

Today, UFCW Local 401 President Thomas Hesse arrived at the Glenmore Inn in industrial southeast Calgary with a special document that he had prepared for Cargill. It was a strike notice.

Under Alberta law, if unionized workers wish to go on strike there are a number of mandatory steps that must be followed. After a strike vote is taken, a notice must be prepared and delivered in person to Company officials that meets certain technical requirements.

Local 401’s strike notice was provided to Cargill’s Vice President of Labour Relations, Tanya Teeter, during today’s negotiation meetings. Unless a deal is reached, a strike will commence in the wee hours of the morning on December 6, 2021.

Not only did 97% of voting members endorse a strike, close to 80% of eligible voting members turned out to vote. Further, data acquired from membership polling reveals that the number of workers committed to long-term and sustained picketing is very significant.

A picket line will be highly visible, and a strike appears to be a viable weapon in achieving a fair offer in negotiations. Cargill’s Plant is located in High River, and it is believed that any attempts by the Company to employ a scab strategy will fall short as available labour will be sparse.

Public support is predicted to be strong.

President Hesse set out the tragedy of Cargill workers in the national media over and over again when COVID-19 ravaged the Plant. Hesse’s efforts resulted in millions of Canadians coming to understand and express their sympathy for Cargill workers.

“Local 401 fought and was successful in having Cargill’s High River Plant closed,” noted Secretary Treasurer, Richelle Stewart. “The Government of Alberta did nothing to address the unfolding tragedy and was later revealed to be untruthful in its dealings with Cargill workers.”

“It became clear to Canadians that meaningful action was only achieved for Cargill workers because of the strength of Local 401 and its members,” continued Stewart.

There remains an opportunity to reach a deal before a strike occurs.

Workers at food plants like Cargill, JBS, Olymel, and Maple Leaf have some of the most dangerous and demanding jobs in the world. These workers want what all of us want – respect, recognition, a safe workplace, and fair compensation.

Will a deal be reached? We can’t know at this stage.

But, what we do know is that Cargill workers do not have mixed feelings about issues at the Plant. They are not ambivalent about picketing and doing what needs to be done to fight this fight and get a fair offer.

If Cargill union members want to strike, with all of its risks and uncertainties, Local 401 will lead them in that strike.

The strike could be accompanied by a variety of other actions.

A boycott of the beef industry itself is a possibility. Consumers could be asked to avoid the consumption of beef until Cargill workers are treated fairly.

There may be picketing and leafleting in front of other workplaces if they sell Cargill products. Albertans may even be confronted by picketing Cargill workers as they approach the drive-thru at McDonald’s.

Cargill is big, and they are bad. But the voice of the workers will be heard. We are not afraid.