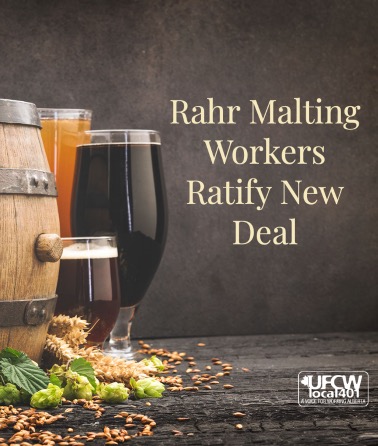 December 7, 2020 – Alix, AB – UFCW 401 members at Rahr Malting recently voted in favour of a new and improved Collective Agreement by a margin of 79%.

The workers at Rahr Malting proudly produce world class malt, made from Canadian barley and wheat, for beer and spirit makers throughout North America and beyond. It is a relatively small operation with many long-term employees, creating a close, family feel to it.

Negotiations were concluded rather quickly and without much complication. While there are always differing views on what ought to be in the Collective Agreement, employees found the company’s offer got them where they wanted to be.

“The workers were pleased the employer didn’t demand takeaways,” lead negotiator Joe Irving reports. “They offered a signing bonus and wage increases in the second and third years of the contract, which has given these incredible workers labour peace for another 3 years.”

There was also an increase to the boot allowance, and other improvements, like ensuring Shop Stewards or a Union Representative be present for new hire orientations and improved flexibility in flex day usage for employees.

Congratulations to our sisters and brothers at Rahr Malting on your new and improved Union Contract!