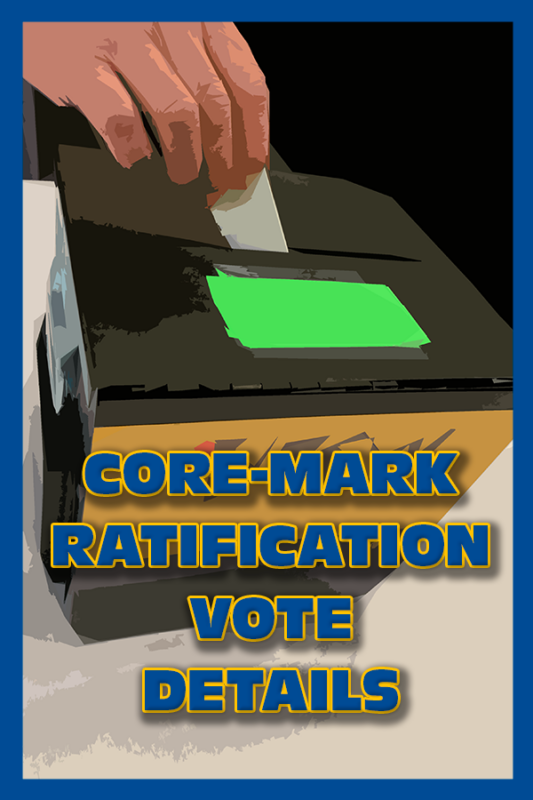 Your bargaining committee has concluded another round of talks to negotiate a new contract for employees at Core-Mark International in Calgary and Edmonton.

Make sure to scroll all the way to the bottom for vote dates and times, as well as important information about the NDF.

As you may recall, the company has offered you very little in the last round of bargaining.

The bargaining committee is happy to report that the company has since listened to your concerns and disappointment in what some employees described as a slap in the face. As a result, they have increased their offer to you by a substantial amount.

There is now a signing bonus for all employees after ratification, $1500.00 after tax and an immediate raise of 2.65%, which will give everyone between $0.60 and $0.81 an hour raise right away. Next year there will be another 3% raise for everyone.

There are also increases to the premium pay, including Night/Freezer/Loader/Shipper/Receiver/Dry room, of $0.25 per hour.

It is a two-year deal going forward, so your union can start negotiating for even more improvements in less than two years.

You can see a copy of the proposed contract changes here.

Contract talks were difficult, and you should commend your coworkers for their hard work and strength in facing your company officials to demand better terms and conditions for everyone. It isn’t easy facing down Company officials and their lawyer.

This latest company offer is a deal that your committee can recommend. In their opinion, it is the best deal you can get without taking a strike vote and going on strike.

Voting for this offer will be:

If you vote in favour of this contract as part of that process, you will also be voting to accept entry into the National Defence Fund, a strike support fund to which most UFCW members across Canada already belong. It’s a fund of approximately 100 million dollars that gives you as members access to finances should you ever have to go on strike. The cost is $2.00/week. Without it, the decision to go on strike in the future is much more difficult as there is far less payroll support for those strikers who aren’t in this vital fund.

Here is a link to a web page and video that explains the NDF in greater detail.

Please come out and ask questions and cast your ballot—direct any questions or concerns to your Union Representative Jason Gutierrez, Matthew Gilks, or Abdi Guled.