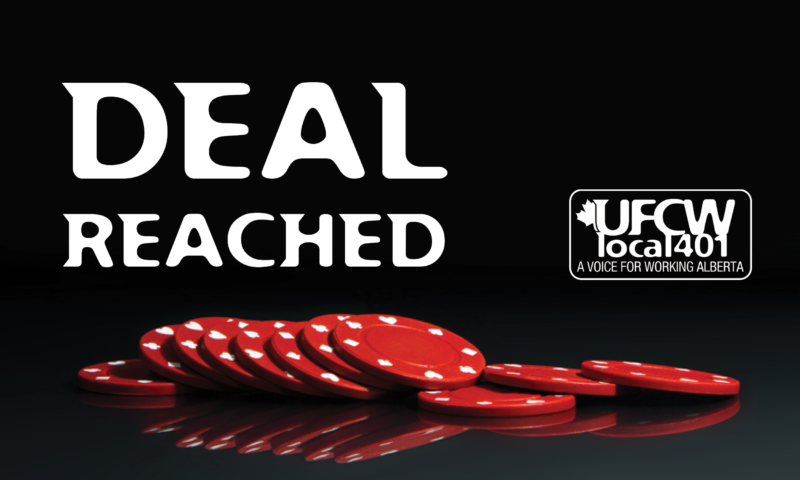 Edmonton, AB — On May 14, 2019, union members at Grand Villa Casino in Edmonton voted in favour of a new agreement with their employer, Gateway Casinos. They also set in motion a unity campaign across the casino to prepare for negotiations next year.

Located in Edmonton’s ICE District and attached to Rogers Place, the Grand Villa Casino has had some struggles since moving across the street from the dated Bacarrat casino building in 2016. The economic promise of the much-lauded ICE District has not fully materialized, and casino management seems not to have been able to benefit from the revitalization that has come to the city’s downtown core.

The short-term deal with the company, expiring in May 2020, was seen by members as an opportunity to allow casino management a chance to turn its business around.

On the heels of an 18-week strike at four casinos in BC’s Okanagan, Gateway management pursued an aggressive strategy in Alberta with no regard for the perspectives of employees. The company pushed for a lockout at the casino. In response, union members mobilized for a strike and launched a series of legal challenges to the employer’s aggressive bargaining tactics.

In the end, employees decided that a dispute at this time might do more harm than good and would have little impact on the employer outside the hockey season.

By agreeing to a short-term deal, ratified in a membership vote by 79%, UFCW members said they were putting the company “on probation” and committed to using all mechanisms available to them throughout the term of the agreement to ensure management is doing its job to bring business to the casino.

“We are really encouraged by the strong turnout and the energy and interest so many of you have shown,” the union’s bargaining committee wrote to Grand Villa union members. “We know this wasn’t an easy decision to make, but you got engaged, reflected on it, and decided what’s best.”

“We continue to have serious concerns about how Gateway is running its business in Alberta,” said lead union negotiator, Tom Hesse. “This includes concerns for the physical security of our members and patrons as well as the job security of all involved. Management simply has to do their job. They have to do better. They can start by listening to their employees, the people on the ground, and the challenges they face.”

This set of negotiations has caused a stir amongst casino union members. As a result, a renewed sense of activism and engagement has emerged across the casino with UFCW Local 401 members wanting to increase the voice and visibility of their union in the workplace.

UFCW members at Grand Villa work not only in the table games and slots side of the business but also providing security, guest services, and food and beverage offerings such as at Match Eatery, Atlas Steak + Fish, Sbarro’s, Verra’s, Pinkberry, and Starbucks.

“Union members building unity and solidarity across the casino is the major goal we have over the term of this agreement,” asserted Penton.

UFCW Local 401 members at Starlight Casino in Edmonton, also owned by Gateway Casinos, are heading back to the bargaining table again at the end of the month. Meanwhile, gaming employees at the Elbow River casino in Calgary, newly organized with UFCW Local 401, have recently voted to accept a mediator’s recommended settlement, though that employer remains resistant to the terms of a first collective agreement there.