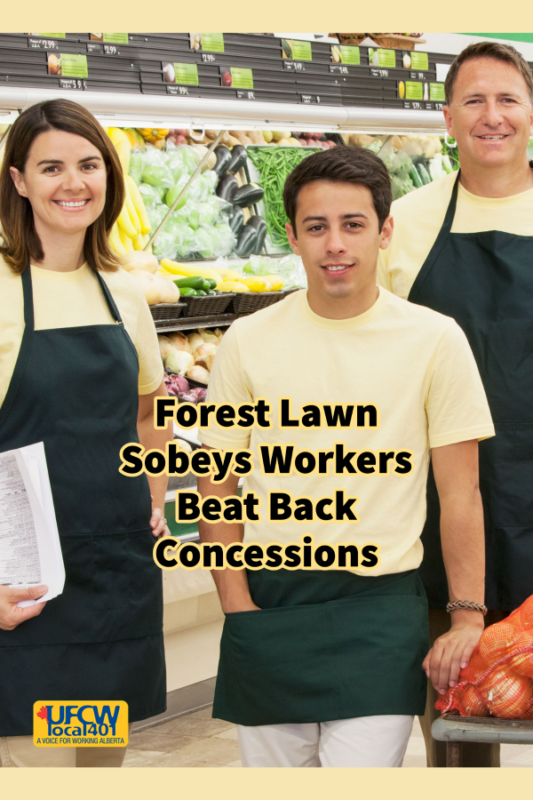 November 10, 2021 – Calgary, AB – Members at Calgary’s Forest Lawn Sobeys have voted to accept some great improvements to their Collective Agreement. Between the retail and meat collective agreements, members voted a collective 81% in favour of a five-year deal that offers wages increases and improvements to important rights.

“70% of the members at Forest Lawn are at top rate and the company has refused to provide this group with wage increases for years,” says union negotiating committee member Amy Mills. “With wage increases and retroactive pay, this is a long-overdue win for these hard-working, long-term employees.”

There are also lump sum payments in the next two years, with a wage reopener in the third year. Workers will have a better opportunity at that time to negotiate wage increases outside of the tough economic climate we find ourselves in now.

Problems with the wage scales since the minimum wage was raised several years ago were also fixed. This means that employees will now have a faster path to their next raise and to top rate.

Other improvements to Employment Standards that were implemented by the previous NDP government during their term are also now insulated and protected in the Collective Agreement. If subsequent governments attempt to take away those rights, Forest Lawn Sobeys workers will continue to enjoy them now that they are part of their new and improved Collective Agreement.

“Improvements to bereavement leave and most of the Employment Standards leaves were incorporated into the contract as they are written in law, and the employer cannot take advantage of governments who remove those rights,” union committee member Abdullah Hussain tells us.

Representation language, obligations of the employer to share information, new-hire orientations, and Health and Safety Committee provisions were all strengthened.

Special thanks to the Union Negotiating Committee who held strong as the company came to the table with numerous concessions demands. This, despite the hardship and anxiety the members have faced over the past 18 months working through the pandemic.

Clearly these greedy companies continue to undervalue and disrespect their employees despite record profits. But Forest Lawn Sobeys workers demanded, and won, much more than their employer was willing to initially give. They are truly heroes.