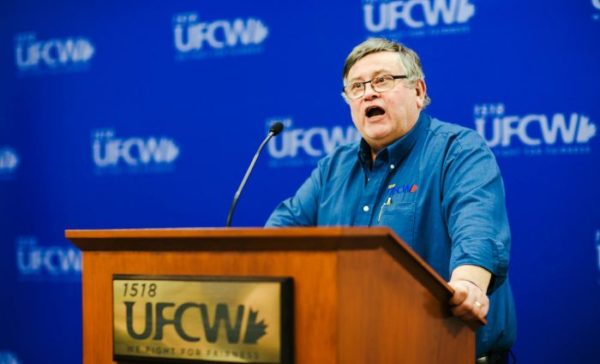 Our recent updates have covered union negotiations with Sobeys in Saskatchewan and in Manitoba. Some of you are wondering what is happening in British Columbia.

This week, UFCW Local 1518 issued a press release that is instructive and helpful to understanding the labour relations context there.

Notably, Vince Ready, the same person who wrote the Saskatchewan recommendations that became the settlement in that province, has been appointed by the BC Government to intervene in stalled negotiations between UFCW 1518 and Sobeys.

Local 1518’s statement speaks for itself, and we provide it here in its entirety.

CLICK HERE FOR A PRINT-FRIENDLY VERSION OF THIS UPDATE

NEW WESTMINSTER, April 4, 2018 – British Columbia’s Minister of Labour Harry Bains has appointed Vince Ready as special officer in the dispute between UFCW 1518 and Sobeys, owner of about 60 Safeway stores across the province. Minister Bains made the appointment after President Ivan Limpright requested the government’s assistance when negotiations for the reopener of the collective agreement stalled last month.

“We came fully prepared to negotiate improvements to the collective agreement. We tabled solutions that would benefit both our members and the company. But Sobeys failed to respond to even one of our proposals and we reached an impasse,” commented President Limpright.

According to Minister Bains, the objective of the appointment of a special officer is to “further industrial peace.” Bains advised Ready that under Section 106 of the BC Labour Relations Code, he is empowered to “make recommendations or any order necessary or advisable” as well as “to arbitrate the dispute or differences.”

Ready is a well known mediator and arbitrator with extensive experience in the retail food industry. His appointment to resolve or decide the union’s differences with Sobeys signals the Minister of Labour’s concern over the potential loss of jobs and negative impact on the economy this dispute could have.

“Listen, we all know the concerns with Ready. But he’s the Minister’s pick,” Limpright said. “We have a strong legal strategy and the reality is we’re in a far better position now that we are going to mediation rather than if we were pushed directly to final offer selection. We were effective in preventing Sobeys from driving our negotiations to final offer selection, and that’s critical.”

The bungled purchase of Canada Safeway by Sobeys’ has led to a series of serious problems for the company and union members, including the company’s attempt to introduce a discount banner into the BC market. In February, the union filed an illegal lockout complaint with the BC Labour Relations Board after Sobeys announced it was closing 10 Safeway locations.

UFCW 1518 also filed grievances against Sobeys for unjust demotions related to the store closures as well as for improper scheduling. “We’re defending our members’ rights on all fronts” explained President Limpright. “This is a complex situation in uncharted territory, so we’re making sure to use every option available.”