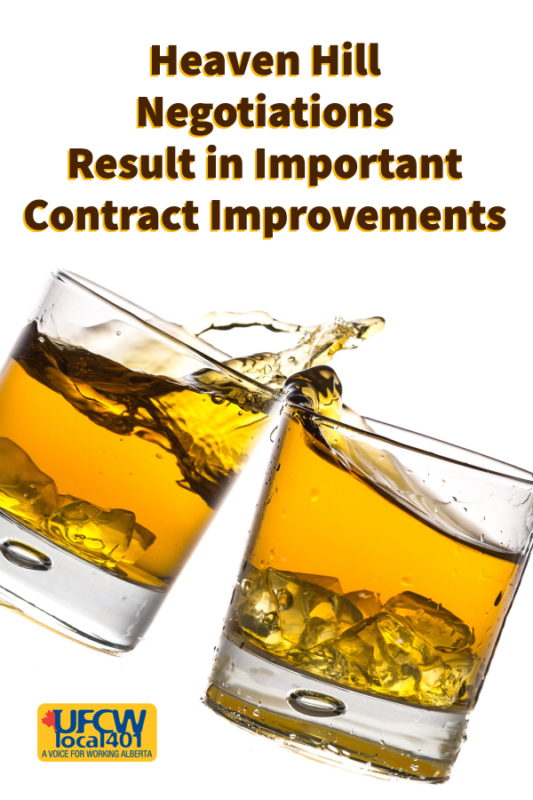 October 21, 2021 – Lethbridge, AB – Workers at the Heaven Hill Distillery in Lethbridge have voted in favour of a much-improved Collective Agreement by a margin of 86%.

This distillery, which produces Canadian whiskey under the Black Velvet family of brands, has been operating for over 65 years and was recently acquired by Heaven Hill Distilleries, Inc. in 2019.

While the new 4-year contract includes many significant improvements, the negotiating committee was successful in fighting off company demands to increase flexibility for scheduling shifts, which could have included alternate shifts and weekends with little to no restrictions. These same demands that have forced our sisters and brothers on strike 6 weeks ago at the Heaven Hill Distillery in Bardstown, Kentucky. Workers’ weekly schedules are an important factor in achieving a work/life balance and providing stability to the day-to-day lives of all members.

“The negotiating committee pushed back hard and have ensured predictability in weekly shifts, which is an important achievement for our members,” says the union’s lead negotiator Devin Yeager. “It is our hope that these provisions and improvements will be helpful to our comrades in Kentucky in their strike with Heaven Hill.”

The previous contract expired in June 2021 and workers can now look forward to a number of significant improvements, such as:

The negotiating committee could not have achieved these gains without the strength and solidarity of a unified membership that stood firm for their beliefs and demands. These improvements will have significant impact on the lives of workers not only in Lethbridge but will be used as an example for workers across the province.