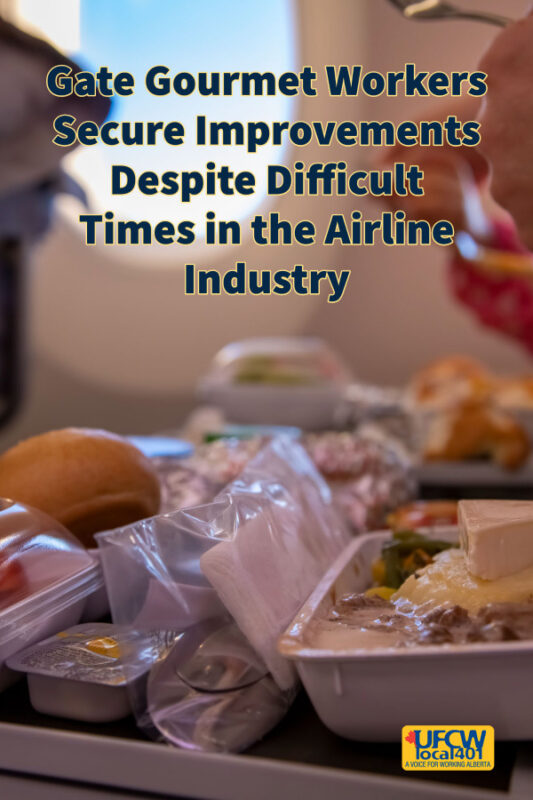 March 15, 2022 – Edmonton, AB – After a difficult and long round of negotiations, members at Gate Gourmet have ratified a new Collective Agreement by a margin of 57%.

“This is a short-term deal to get Gate Gourmet to better times, and based on this low acceptance, the company knows they need to bring more to the table next time,” Union Labour Relations Officer Saba Mossagizi says.

This three-year retroactive deal, which expired in July 27, 2020, includes increases of:

With two raises coming immediately upon ratification and full retroactive pay for 20 months, these workers can be proud of what they have won by way of monetary compensation.

There were other improvements as well, including:

The committee held strong to securing a short-term contract where they will have the opportunity to get back to the negotiating table in 16 short months. With people slowly beginning to travel again and more flights being scheduled, we look forward to the company doing better in every area next time.

It has been a tumultuous time for these workers who supply airlines at the Edmonton International Airport meals and refreshments for air travellers and airline staff. Despite the employer focusing on the impacts COVID-19 has had on its business and claiming they are unable to provide much in the way of improvements, the bargaining committee members pushed hard for, and won, important improvements.

“Our committee members, Shafin and Bambi, were selfless, patient, and unwavering when it came to fighting for a better contract for everyone at Gate Gourmet,” Lead Negotiator David Smith tells us.

Congratulations to the Gate Gourmet members. You achieved a deal to be proud of in the face of historically difficult times in the airline industry.