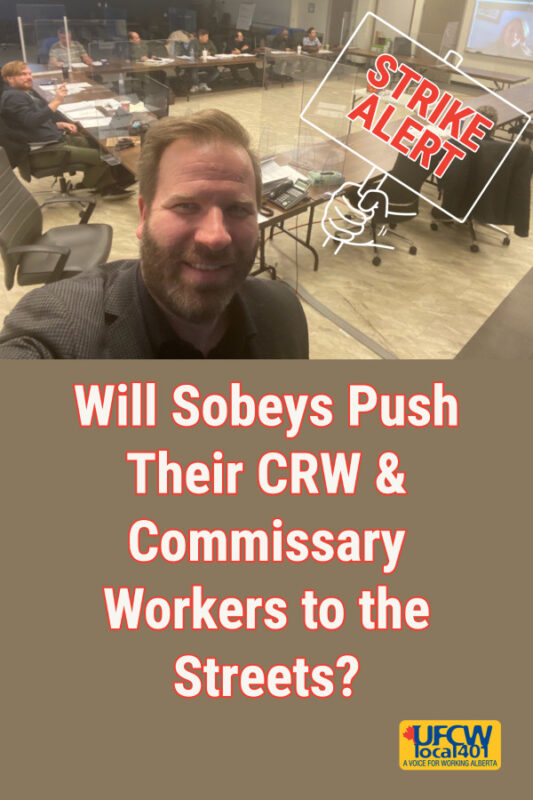 Is a Strike Imminent at CRW?

On Wednesday, November 30, your Union Bargaining Committee met with Sobeys for an additional round of negotiations. These meetings were focused on laying out a more aggressive bargaining position now that you have rejected the Company’s offer and taken a strike vote.

Your Bargaining Committee told Sobeys in no uncertain terms that they needed to provide the following or they would be facing a strike in the New Year:

Sobeys officials said they would take those asks away and have a response for us early in the New Year. We are holding dates in the first two weeks of January to meet with Sobeys again and hear what they have to say.

It is vital that you fill out this form to ensure we are ready to go on strike if Sobeys does not meet your priorities for a fair deal.

Your union continues fighting at the Labour Relations Board to ensure that we are able to organize the strongest and most effective strike possible. Without the ability to engage in secondary picketing at locations like Safeway, Sobeys, and FreshCo grocery stores, the pressure we are able to place on the Company will be limited.

While the Board’s initial response to our application was not favourable, your union and the lawyers we have hired are pushing to have their decision appealed and ensure we can take the fight to Sobeys when the time comes.

“If we go on strike at CRW and picket at more than 150 secondary locations, it will represent the largest strike in Alberta’s history,” said UFCW 401 President Thomas Hesse. “We need to make sure we get this right and we won’t stop fighting to give our CRW members the strongest voice possible.”

We urge you to continue standing strong and fill out our pre-strike registration form so that we are ready to keep taking the fight to Sobeys in the New Year.