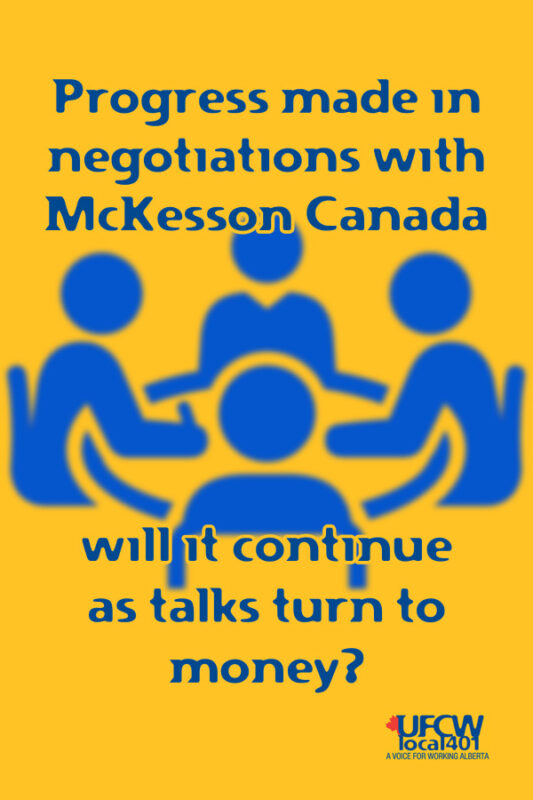 March 2, 2022 – Edmonton, AB – Your bargaining committee has been working very hard to negotiate a new and improved contract with the company.

We met the week before last for a couple long days with company officials. We achieved a number of improvements to your contract regarding non-monetary proposals that govern scheduling and your rights in the workplace.

Health and safety committees have been strengthened and meetings will be more frequent.

Union orientation language has also been strengthened and time spent with your stewards prior to a meeting with company officials has been increased.

Protected leaves of absence have been added to your contract so that your job is protected in case of critical illness of a family member or a domestic violence situation. Citizenship leave has also been added for those who have applied so that they may attend their exciting and important citizenship ceremony!

Though bargaining proceeds slowly, your committee is working hard and giving careful and thoughtful consideration to fighting for improvements to your rights.

We will meet with the company again in early April and anticipate moving into important monetary issues.

Normally, this is where bargaining becomes more difficult. Now is not the time to let our collective guard down. We have made some progress, but when it comes to cost items like wages and benefits, most companies start to get a lot more difficult to bargain with. All of you have worked extremely hard over the past few years and deserve healthy wage increases. McKesson has been very successful and highly profitable in this time. Inflation is high and paycheques don’t go as far as they did, even from just last year. As your union negotiating committee, we draw all of our strength from you and your commitment to support us in fighting for improvements. With that support, we can work toward achieving the best contract possible, and we thank you.

If the company doesn’t make an acceptable offer, we will recommend that you reject that offer and take a strike vote. That is where the National Defence Fund (NDF) would be invaluable, giving full-time members an additional $200.00/week in strike pay, and part-time an additional $100.00/week. Let your stewards and Union Representative Cheryl Watamaniuk know that you want to have a vote so you can join that fund! You must be a member of the NDF to enjoy the additional money when you need it most.

Stand strong, stand together, and don’t hesitate to speak to your supervisors and co-workers about your demand for a better contract!