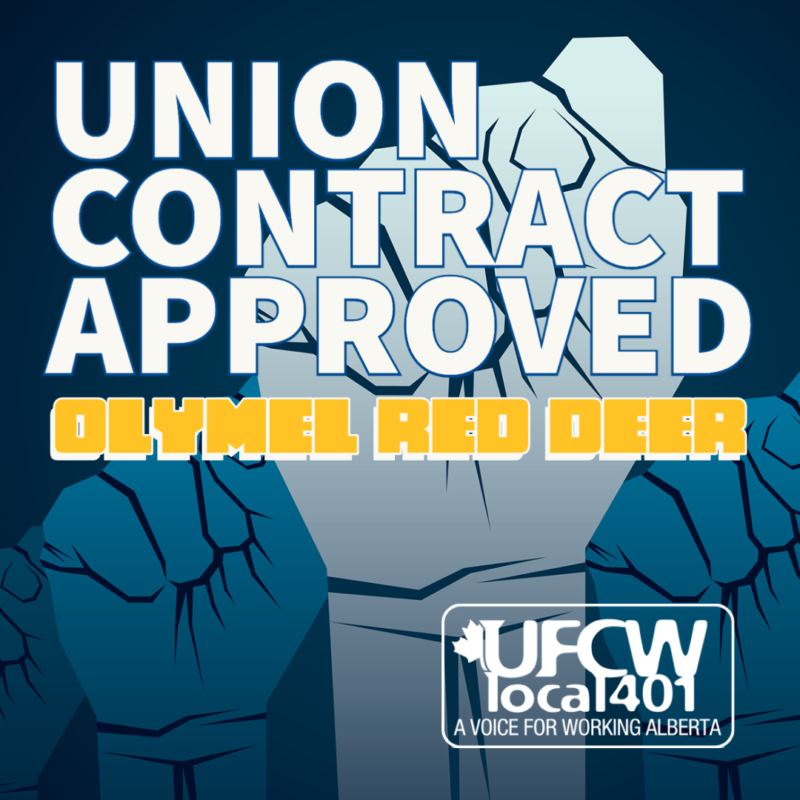 Olymel union members have voted in favour of a new union contract. The outcome of the vote was 62% to accept. On behalf of Richelle and I, I would like to thank UFCW 401 negotiators, staff, and union member bargaining committee representatives, who worked so hard to face down Olymel’s lawyers and representatives in a tough set of negotiations. The new collective agreement, viewed in the deep economic recession that Alberta faces, is a very positive one overall. Wage increases exceed $2.60 per hour, and there are a variety of economic bonuses written into the new union contract. There are also a variety of new protections for employees’ rights. If you would like to see the new contract, simply reach out to your Union Labour Relations Officer or UFCW Union office.

Bargaining has been a very open and transparent process. Employees were provided with updates and information every step of the way. Voting was held in a special two-day process conducted right at the workplace. No employee and no union member was told what to do. I’m very proud of our new approach at our union. We lay out the facts, we bargain hard, and decisions are left to the members. We must know that while you belong to a union, the union must belong to you.

Even though the economics of the Olymel contract are very positive compared to the economics of Alberta as a whole, a vote reflects the fact that there is a lot of anxiety and tension in this difficult time. Food processing companies must be reminded of their duty to keep employees safe, and we restate our demand for these rich companies to reinstate pandemic pay. Whether it is in your union contract or not, all food processing companies have a duty to restore hazard pay.

Make no mistake about it, the reason the Olymel contract is as good as it is is because Local 401 and its members are strong. We are a fighting union. We cannot be afraid to threaten a strike if necessary. Employees at Olymel, Cargill, and JBS contribute to a special fund called the National Defence Fund (NDF). That fund has tens of millions of dollars to provide fair strike pay in the event of a dispute. Olymel bosses knew that. Cargill and JBS bosses need to be reminded of that.

Cargill and JBS union negotiations will soon take place. We must bargain strong. As individuals, you are easily exploited by billion-dollar companies. Joined together in a union with significant resources, we can do our very best during these very hard times.