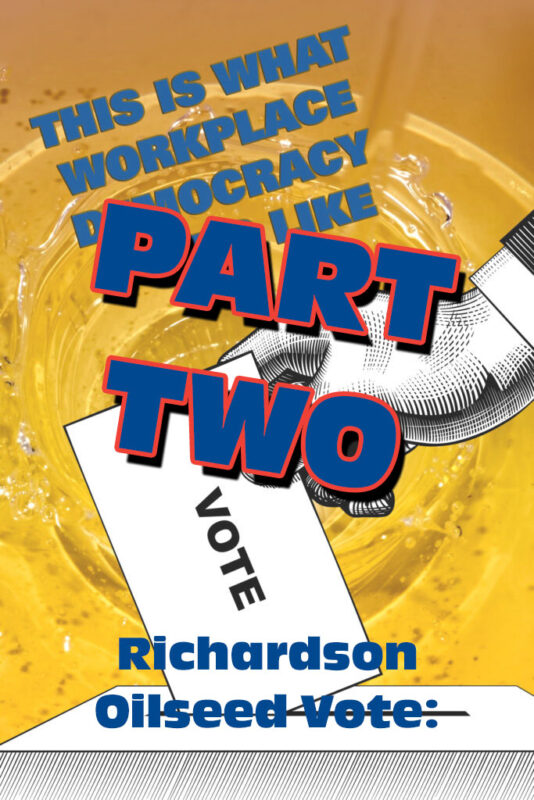 Following the 80% rejection of the companies last offer, Richardson Oilseed has enhanced its offer of settlement. The negotiating committee fully endorses this contract offer.

Late in the day, Friday, January 21, 2022, your Union made a counter settlement offer. This proposal moved money the Company had intended to be in the later years of the contract into the retro period. As you will see in the offer (linked here), the Company has moved some money around and increased the overall monetary settlement.

The Companies offer of settlement included the rights and contract language improvements previously negotiated and presented to the membership. The Company has offered an additional 1.75% increase in the first three years of the contract (the retroactive period) and an additional year at 2.5% at the end of the contract. Here are the changes to the wage offer:

“We were also able to negotiate an improvement for the members progressing from Operator 6 through 5.3, 5.2, 5.1 up to Operator 5,” continued O’Halloran. “This is an important improvement that will allow members to move up pay classification automatically to start and faster throughout.”

You can view the complete offer of settlement at the link above.

The membership will vote to accept or reject the Company’s offer the same way they did previously.

The votes will be counted on February 3, 2022, at the Union office.

The question on the ballot will be:

If the offer is rejected, we will proceed with the next steps towards a strike vote.

We will also be holding a Zoom ratification meeting 7 pm, Thursday, January 28, 2022, to review the company offer and answer questions.