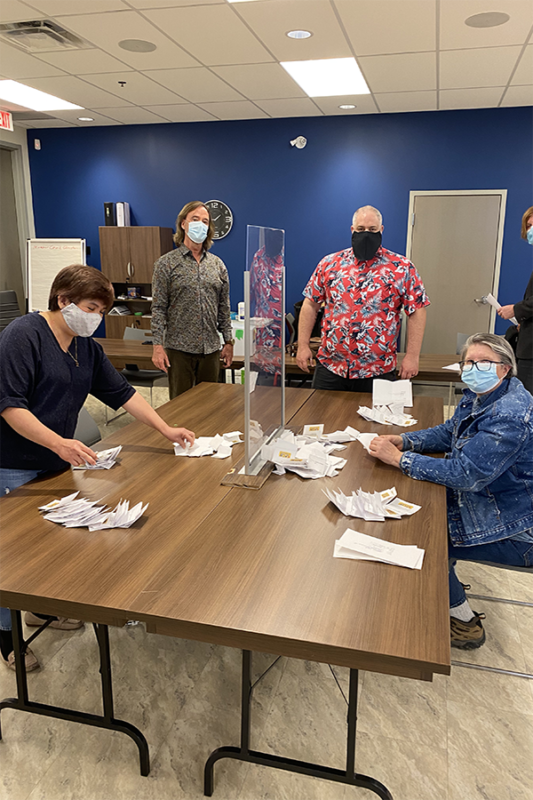 After three days of voting on Saturday, March 13 through Monday, March 15, 2021, Sofina Calgary union members expressed 75% support for ratifying a new contract at the Plant.

“I know Sofina Calgary union members thought long and hard about their options,” said President Thomas Hesse. “And their union supported them by providing research and information to ensure they were able to make an informed decision.”

Overall, the increases will place more than $1 million in Sofina members’ pockets over the life of the contract.

Lead hands will see premium increases, and there are substantial overall increases to the entirety of the premium structure.

“As an open and transparent union, the most important voice is that of our members,” said Secretary Treasurer Richelle Stewart. “We are glad to see our Sofina Calgary members making their voices heard with this vote.”

Sofina Calgary union members’ new contract increases the meal allowance provided during rest periods. Further, language ensuring that any interruptions to breaks are acknowledged either in additional rest time or compensation for the break time that was interrupted was achieved. This was an important improvement for many Sofina workers who were having their breaks regularly interrupted to go back to the floor for work and not benefiting from any acknowledgment of those interruptions. Time off between shifts has also increased in the new contract.

Sofina workers’ benefits are improved in this contract.

The contract provides increases in equipment allowance for the purchase of rubber boots, and steel-toed boots for maintenance employees. Temporary job vacancies will be filled much more quickly and efficiently, which was an improvement that Sofina workers identified needing attention in negotiations.

Limitations around maternity and paternity leave have been removed to make these benefits more accessible to Sofina Calgary union members.  And upgrades to the scheduling of vacation have also been achieved in this contract to ensure that all union members have better access to vacation time that meets their needs.

“Any time we can work to better the lives of our members and their families is a win in my books,” said President Hesse. “I’m glad we were able to achieve these important enhancements for Sofina Calgary members during these challenging times.”

A major point of contention in negotiations was the Company’s efforts to eliminate the Guaranteed Work Week in the new contract. Your union fought hard to push back against this initiative and was successful in ensuring that a Guaranteed Work Week was maintained for new employees who have worked at the Plant for two years or more, and with no change to the Guarantee for any current employees.

Your Union Labour Relations Officer now has access to the production floor to observe working conditions and ensure your rights are being respected. This is very important and will increase the visibility of your union in the workplace.

In this language, the Company agrees to work with the union in getting relevant information to Sofina Calgary union members regarding health and safety in a timely fashion, particularly in the case of an outbreak at the Plant. Securing the Company’s cooperation in this regard is a vital component to keeping Sofina Calgary workers safe during the global pandemic.

The Company has also agreed that vaccination should be voluntary and has committed not to implement vaccination as a condition of employment.

Finally, a committee, which includes representation from Sofina Calgary union members, has been struck to help facilitate movement into the new Calgary Plant. Representation on this committee will ensure that Sofina workers’ interests and perspectives are included in the moving process.

Sofina Calgary members’ ratified contract takes effect retroactively as of April 3, 2019 and will be in place until April 3, 2024.

Your union would like to thank the Sofina Calgary Bargaining Committee for all its hard work in securing these many improvements for Sofina Calgary workers under very difficult circumstances.