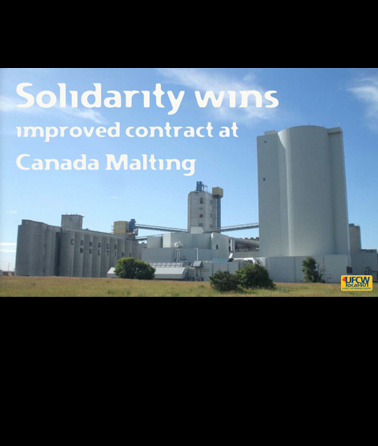 Speaking with One Voice Secures a Fair Settlement at Canada Malting

September 18, 2020 – Calgary, AB – Thanks to the determination and solidarity among the workers, Canada Malting employees have just accepted a new Collective Agreement (Union Contract) offer from their employer. The new contract includes a number of hard fought for improvements, despite the employer’s ongoing resistance throughout the process.

“Sadly, the employer made poor excuses for needed improvements in a number of areas of the Collective Agreement, even taunting some employees by telling them they could go work somewhere else if they didn’t like it,” Irving recalls.

The membership in the workplace stood behind their committee, however, and showed their collective strength by wearing “Union Proud” stickers on their hard hats in support of a small group of workers the employer had no interest in rewarding with appropriate pay increases.

Some of the highlights of the offer include heightened union voice and visibility, including meaningful language around respecting the union’s role and securing union activity on company time. Improvements to union voice and input were also achieved regarding health and safety in the plant with new language for a joint health and safety committee.

Workers were also able to push back concessions the employer was seeking regarding benefits. In fact, some improvements were achieved in that important area. Their hard-fought efforts assist UFCW members across the Country in their upcoming negotiation efforts by continuing a 100% employer funded benefit plan.

Also won were annual increases in each of the three years of the contract, with full retroactive pay for all employees.

In addition to the strong unity among the membership, Irving also tips his hat to the union members who served on the committee.

“The workplace committee was 100% dedicated to this process and trusted that even during the employer’s delays, that a successful deal could be reached – they really put in the time and sacrifice to see this happen,” Irving boasts.

They ensured the frustration was not directed at their union, but at the employer who continued to delay the process. Their message was unified and well received when speaking to the rest of the membership in the plant.

Congratulations to the workplace bargaining committee! And a big congratulations to each and every worker who stood shoulder to shoulder and spoke with one voice. When we stand together, employers have no choice but to listen. Wearing a message of unity in the form of union buttons or stickers on your hard hat may seem like a small and insignificant act, but it makes all the difference and speaks loudly to the bosses. It certainly paid off in this round of negotiations!