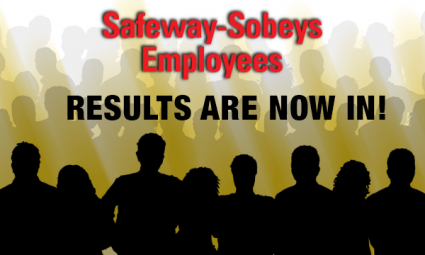 The Storm Came – And You Stood Strong and Faced It!

From the beginning of negotiations with Safeway-Sobeys, we told you that a storm could be coming. While we entered negotiations with the same guarded optimism we always do, our experiences with Sobeys told us that we could be in for a fight.

Sure enough, it quickly became clear that the employer was after major concessions. Removing department managers from the union and allowing vendors to stock shelves would have drastically and negatively impacted all of our Safeway members’ lives and the company seemed dead set on achieving these concessions.

The storm was upon us. And in the face of that storm, Safeway members stood strong and refused to be pushed around.

At the bargaining table and in the stores, we sent Safeway-Sobeys a strong message that Safeway members would fight to maintain their contract and achieve the gains they deserved.

When the dust settled, your strength and determination prevailed as the storm passed us by. Not only did Safeway-Sobeys drop its two major concessionary demands, it also offered Safeway members wage increases!

Over the last week and a half, Safeway members have had the opportunity to cast their ballots on the proposed contract and the results are now in:

This is a major victory for Safeway members. Not only did you fight off the employers’ concessions and win the contract improvements you deserved, this is the first time since 1992 that an agreement has been reached without having to take a strike vote first!

Thank you to all the members who attended the ratification meetings across the province to ask questions and cast their ballots. And thanks to every Safeway member for demonstrating so clearly what we can achieve when we bargain strong together!