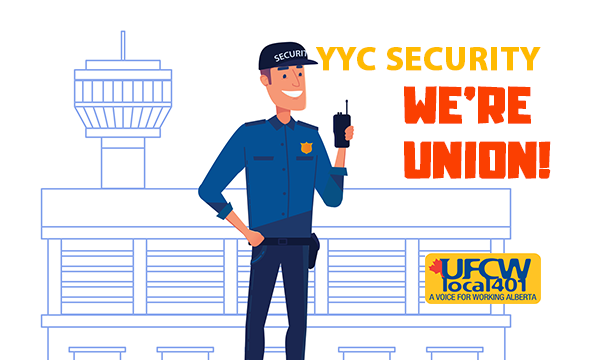 “A Testament to What We Can Accomplish”

CALGARY, AB – January 8, 2020 – Non-screening security workers at the Calgary airport, employees of ASP Security Services, have voted overwhelmingly in favour of their first collective agreement. The December 22, 2019, vote resulted in 86% of voting employees approving of the agreement, which will provide union protection for the 130 employees, who voted to join UFCW Local 401 in July of 2019.

Responding to the unique working conditions of the ASP membership, a special set up was needed for the vote. Held at the airport with members of their bargaining committee available to answer questions and explain the deal, ASP employees were welcomed to ask questions about the new agreement directly before casting their ballot. This ensured both a strong voter turnout and a clear and informed collective decision.

This strong first agreement introduces a number of key gains for union members:

UFCW Local 401 Union Labour Relations Officer, Stephen Reed, congratulates the new ASP members, noting the many hurdles they overcame in achieving their first union contract. “Our ASP members worked closely with the support of UFCW staff throughout this process, overcoming challenges presented by the fast-paced and high stakes nature of the work. There were some anxious moments through the organizing phase, but by staying committed to our goal, we achieved something we can all be proud of.”

“I was thrilled to see ASP employees stand united and strong in support of their bargaining committee,” says lead union negotiator and UFCW Local 401 Executive Director, Chris O’Halloran. “Many employees came out on their own time to participate in our telephone town hall and other meetings prior to our last bargaining session with the company. This feedback was incredibly important and useful in our ability to send a strong and clear message of solidarity to ASP management.”

“This agreement is a testament to what we can accomplish when workers want to push for their rights and know they deserve more,” adds Reed.

Non-screening guards at the Calgary airport are employed by Ontario-based ASP Security Services, a company contracted to provide security to passengers and the public. ASP is a wholly-owned subsidiary of ICTS Europe, one of the world’s largest employers of aviation security guards.