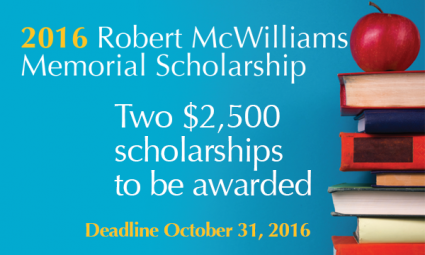 UFCW has many different scholarships available to 401 members and their dependants.  The latest scholarship that is open for applications is the Robert McWilliams scholarship.

Robert McWilliams was a Union Representative at Local 401 for a significant number of years. A committed activist, Robert is known to have aggressively defended workers rights throughout his life. Robert became especially well known for his role in ensuring that Superstore employees were treated fairly when the company was becoming newly established in Alberta.

Robert worked with young union members who were university and college students and believed strongly in protecting the rights of part-timers.

Unfortunately in 1989, Robert died suddenly in a tragic traffic accident in downtown Edmonton. It is on Robert’s behalf that this scholarship was created in his memory.

The Robert McWilliams Memorial Scholarship is awarded every year to Local 401 members or eligible family members as stated above. There are two scholarships awarded worth $2,500.00 each.

An application to this scholarship consists of a three part essay as well as being accompanied with proof of full-time enrolment at an accredited post-secondary educational institution.