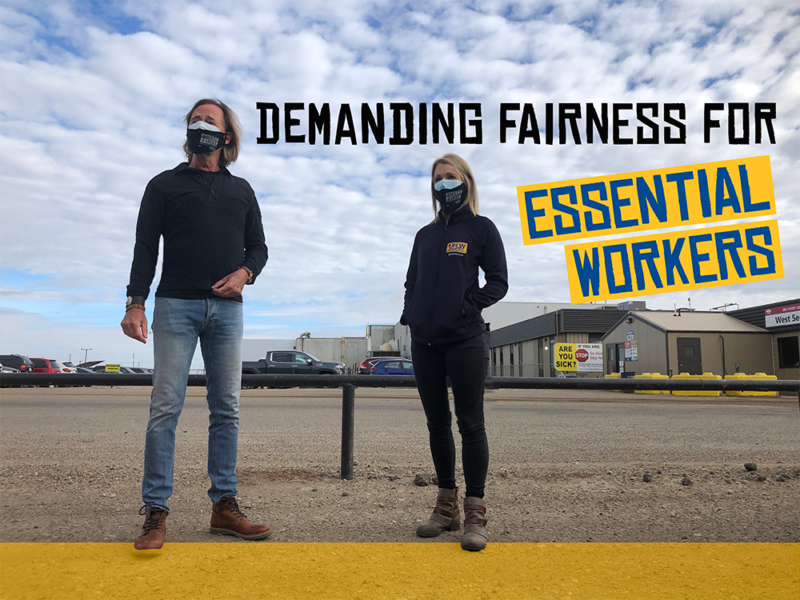 As you have likely heard, on February 10 the Government of Alberta announced the Alberta Critical Workers Benefit Program.

To be candid, we have very mixed feelings about the Program.

On the one hand, your union has been demanding pandemic pay premiums for essential workers for some time now. We have been one of the most ardent and determined voices on this issue.

In some cases, our members had received pandemic pay only to have those premiums prematurely revoked by their employers. In other cases, we have members who have never received the pandemic pay premiums we believe they sorely deserve.

So any movement on this issue is good to see. And we are gratified that decision-makers are finally acting on arguments we have put forward.

Simply put, something is better than nothing.

On the other hand, this Program doesn’t go nearly far enough, and it leaves far too many workers out in the cold.

That just isn’t right. In fact, it is infuriating.

As many of you have said in response to the announcement, no matter what your hourly wage is, every single essential worker has made contributions and faced risks that deserve to be acknowledged.

Similarly, working a certain number of hours in an arbitrary period of time has no impact on the stress and strain you have faced during this pandemic.

And what about workers who have been on some sort of leave during the government’s time frame? If you were on a maternity, disability, or Workers’ Compensation leave, does that mean you don’t deserve to have your contributions recognized? What if you were self-isolating, or actually had COVID-19? It seems ridiculous that in those cases, you wouldn’t qualify.

As you’ve told us, none of this is fair.

Frankly, it also seems unnecessarily complicated. Sometimes, the simplest, most straightforward answer is the best one. And your union believes that is the case when it comes to pandemic pay.

Some of you have asked what we believe and what we are calling for when it comes to this Program. So let us tell you:

Any essential worker who has worked at all during the pandemic should automatically be eligible for this benefit.

That’s it. Period. End of story.

If you’re an essential worker who worked during the pandemic, you should get $1,200.00 from the Government of Alberta.

But that’s not all. We don’t think giving you a one-time $1,200.00 lump sum payment goes nearly far enough considering the risks you’ve faced and the contributions you’ve made.

So in addition to that payment, your union also believes that a $4 per hour pandemic pay premium should be implemented for all essential workers across Alberta immediately.

But we’re not stopping there.

We know that, ultimately, governments tend to move slowly. So, we’re also calling on employers to do the right thing – especially given that many of them are making record profits right now.

Shortly after the government’s announcement, we sent letters to all of your employers demanding that they apply for the Critical Worker Benefit Program immediately to get that payment into the pockets of their employees who are eligible.

For those employees who are not eligible, we are demanding that employers provide the $1,200.00 benefit directly themselves.

Not only can they afford to do so, but it is also the right thing to do and will help to avoid feelings of resentment and frustration in your workplace.

We have clarified our belief that workers who were on any sort of leave should not be discriminated against and should receive a payment. And we have asked employers to do the right thing and commit to implementing a $4 per hour pandemic pay premium in your workplace.

As always, we will monitor the outcomes of our demands and update you about how different employers respond. Our commitment to open and transparent action extends to all elements of your union’s efforts.

At this stage, a number of employers have responded. We are disappointed to hear that while many of them have applied for the benefit, they are not anxious to hear the voices of their own employees who see the unfairness in the current program.

We know how frustrated you are about this Program and how many valuable workers it leaves out. We echo your sentiments about it being unfair and, in some cases, potentially discriminatory.

And all of that aside, we believe that this Program, while better than nothing, does not go nearly far enough in recognizing the risks you have taken or acknowledging the contributions you have made.

Thank you for reaching out to share your feelings on this issue with us. Please do not hesitate to contact your Union Labour Relations Officer for more information on this Program and your union’s efforts around pandemic pay.

We want you to know that your union won’t stop demanding fairness for essential workers during this pandemic. From the very beginning of this we’ve had considerable success in advancing workers’ rights. But there is still more work to do.

History shows that constant argument and action changes minds and outcomes. When it comes to standing up for workers, our patience and persistence is endless.