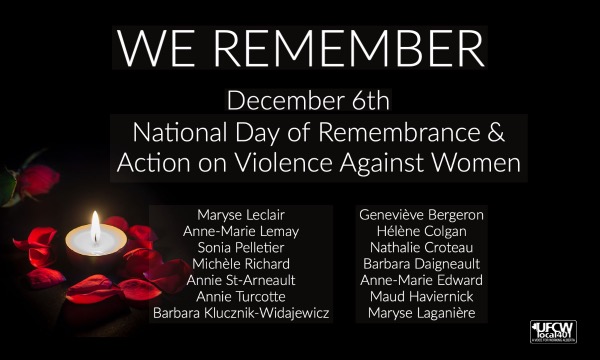 A Statement from Your Secretary Treasurer on White Ribbon Day

Today is the National Day of Remembrance and Action on Violence Against Women, also known as White Ribbon Day. Each year we take time to remember the 14 women who were murdered on December 6, 1989, simply for being women. Thirty-one years ago today, a man walked into a mechanical engineering classroom at Montréal’s École Polytechnique and opened fire with a semi-automatic rifle, shouting about feminism. He also wounded 10 others.

I appreciate that violence isn’t solely a “women’s issue”. Violence affects many people, regardless of gender. It is clear, however, that gender-based violence affects women at staggeringly higher rates. Every night in Canada, on average, 6000+ women and children sleep in shelters because of domestic violence at home. Statistics show us that more than a third of working women report having suffered from domestic violence, and trans* people report even higher rates of violence. Indigenous women are killed at 6 times the rate of non-Indigenous women. And more than half of working women report experiencing sexual harassment on the job.

Due to childcare obligations and the gender wage gap (Canadian women make, on average, roughly 69 cents on the dollar compared to their male coworkers), women often find it much more difficult to leave abusive situations. They are forced to rely on an oftentimes strained support system, if there is one available to them at all.

COVID-19 has also hit women particularly hard. In some parts of the world, support agencies report a 5-fold increase in calls to helplines since the pandemic started. Women are also statistically more likely to give up their jobs to stay home with children during this time. These and many other factors make fleeing violence even more difficult for women in today’s environment.

As your Secretary Treasurer, I reaffirm today that your President, Thomas Hesse, and I continue our commitment to ensuring UFCW 401 members are supported on this issue through collective bargaining. This Local has always been committed to supporting women by fighting for equal rights, protections, equal wages, access to opportunities for advancement in the workplace, and much more. We will continue to find new and creative ways to bargain protections and support mechanisms for women living under threat of violence so that they can get the help they need without worrying about losing their job. Governments are too slow to act; we cannot wait for legislation to protect women. Unionized workers are in a unique and powerful position to bring about changes that support a more equitable and just society, including one free from gender-based violence.

On this day of remembrance, Thomas and I will be thinking of the lives lost, the lives affected, and ways in which we will continue working toward a world where no woman suffers simply for being born female. This is our pledge to you.

December 6National Day of Remembrance and Action on Violence Against Women
Find Your
Rep/Workplace
Stay in Contact
Join Us
© 2022 UFCW Local 401 (United Food and Commercial Workers Canada Union, Local No. 401). All Rights Reserved...
Privacy    |    Sitemap    |    Site by Graphos.
Back
To Top