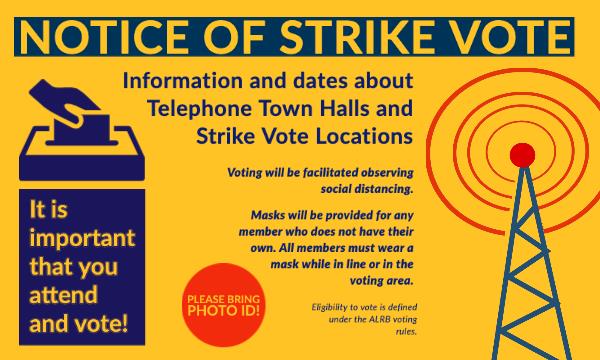 At the end of bargaining on May 24, we shared with you the company’s latest offer for a new union contract for Alberta Safeway employees. So many of you were disappointed with that offer, so in bargaining meetings this week, we pushed the company to improve it. Unfortunately, Sobeys is not interested in doing that without a push. Today, the government-appointed mediator has decided to “write out,” which under Alberta law, sets in motion the process of a strike vote by the end of this month.

In our poll of Safeway employees over the past week, nearly 80% of over 1,500 respondents said we should push for a strike vote.

The company has never taken employees seriously without a push. In fact, since 1992, we’ve had to vote to strike in all but one round of negotiations with Safeway. In that time, there’s only been one strike with Safeway – in 1997.

In other words, taking a strike vote doesn’t mean you will strike, but it is the kind of show of strength and unity that makes the company pay attention.

A strong strike vote will send a strong message to Sobeys that they need to take you seriously and will greatly improve your union bargaining committee’s leverage at the bargaining table.

If there is a positive strike vote, here’s what will happen:

While we are disappointed in the company’s perspective, we are not surprised. Sobeys has said clearly that they won’t give you what you deserve unless you push them. The only legal way for us to do that is with a strong YES vote from the membership in favour of taking strike action.

We’ve been polling you, we know what your priorities are, and we know how you feel about the company’s offer. In fact, only 14% of respondents tell us they feel Sobeys’ latest offer could be acceptable.

You have also told us clearly (by 80%) that you want us to take a strike vote in order to push the company to improve their offer. We’re listening to you, and we are now applying to the Alberta Labour Relations Board for a government-supervised strike vote.

Voting to strike is your legal right

Not only is voting to strike your legal right — it’s also one of the only ways we can legally push big companies like Sobeys to listen.

Sobeys will tell you that voting in favour of a strike is a bad idea. We fully expect the company to campaign for a NO vote. After all, they want you ALL to take what only 14% of you find acceptable.

But the law is clear: the company cannot pressure or coerce you in any way to not exercise your rights. That would be an unfair labour practice and a violation of labour laws. Please let us know immediately if management or anyone acting on their behalf pressures you in any way not to exercise your right to take a strike vote for something better.

Again, a strong strike vote will send a strong message to Sobeys that they need to take you seriously. 14% is an abysmal approval rating. It’s time to make sure we’re wearing our union buttons to let everyone know we’re united!

For many of you, this situation may seem new and perhaps a little daunting, but the possibility of a strike is something we’ve been communicating about for many months. And we’ve done this before!

In the coming days, we’ll be sending out further information covering the key outstanding issues and more extensive information about strike votes and how they can help us get the deal we deserve.

For your convenience, we’ve provided extensive information about strikes, picketing, and picket pay on our website at www.gounion.ca/strikeprep. This information will be continually updated.

When and where will the strike votes happen?

Due to physical distancing restrictions, we will be holding information sessions on the company’s offer via Telephone Town Hall. These meetings will include details about the offer as well as information on what happens after the strike vote.

Please call 1.800.252.7975 if you need to update your contact information. If you miss our call, UFCW Local 401 members can participate online at http://www.gounion.ca/tth

All those who attend the voting locations are required to wear a mask while in line or in the voting area. We will provide masks to any member who does not have their own.

You can vote at any of the following locations in the province: