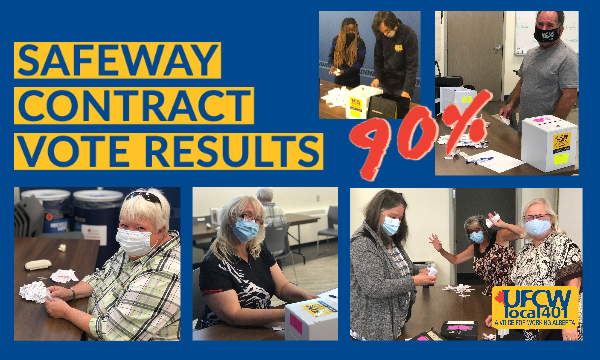 While pandemic concerns loom, members feel confident in their union

“We are pleased to see such a strong and decisive result,” says UFCW Local 401 President, Thomas Hesse. “It’s not just a vote on a contract but also a vote of confidence in our union and our processes of union democracy.”

“Visiting polling stations,” continued Hesse, “I spoke with members who largely felt that the deal wasn’t perfect – and it’s not! – but they were still thankful and relieved that the deal we were able to achieve with a strike vote ended up being acceptable to them. People were particularly comforted by the amount of information that has been shared throughout the process. They really were a part of the process.”

UFCW Local 401 made open and transparent bargaining the emphasis of this round of negotiations. With a bargaining committee and council of nearly 60 Safeway members from across the province, there was broad representation at the bargaining table. But negotiations were open to everyone: every Safeway member was invited to attend negotiations to see the process for themselves and help to shape the perspectives taken by the committee.

“From the outset of this process, we felt strongly that our Safeway members should decide on their contract with their eyes wide open,” says UFCW Local 401 Secretary-Treasurer, Richelle Stewart. “The first step in democratic renewal is not only to involve members but also for their union to lay out all the facts and analysis for members so that they can make the best, most informed decisions possible. Our bargaining team was key in that effort, and we are so thankful to them.”

Through the course of negotiations, UFCW Local 401 Safeway members have received dozens of updates along the way, including at in their stores by visits of bargaining committee members, at union meetings, through email, social media, text message, and – now in the age of COVID-19 and physical distancing – telephone town hall meetings.

“Our communications work has been deliberately multi-faceted and diverse,” said Stewart. “The more information we can get into the members’ hands, the better prepared they will be to make decisions about whether to stand up and fight or take a deal they find acceptable. Those are always their decisions.”

In hundreds of conversations over the past several weeks around negotiations, Alberta Safeway members still expressed concern about COVID-19 and the risks associated with the pandemic for grocery workers.

“We are still deeply concerned about the spread of COVID-19, especially as Alberta schools are slated to reopen,” says Hesse. “But this new Safeway agreement includes new provisions in the areas of health and safety, and I believe it is an agreement that can be adapted to the times we are facing. It’s quite elastic.”

The new agreement contains innovative provisions that emphasize enforcement and compliance of members’ union rights, including the introduction of union walking stewards to help police the deal. There will be a new, on-going scheduling training program to ensure the proper distribution of hours is a reality in every department and in every store.

In terms of elasticity, there will be more bargaining for wages in the fourth and fifth years of the agreement, and the introduction of unionized FreshCo stores to Alberta will involve further negotiations with the company over what that agreement will look like.

“Implicit in this new agreement is also a new commitment on the part of our union to continually elevate the voices of our members,” says Hesse. “Our union spent $1.2 million in processes necessary to get this deal, but even with those resources and that kind of effort, it isn’t perfect. We won’t hesitate to protest and speak out if there are ways in which the agreement isn’t working.”

“We will never stop drawing attention to issues affecting our members, and this process has been about awakening our membership to the importance of participating in their union. We are well on our way, and our Safeway members should feel proud of that.”