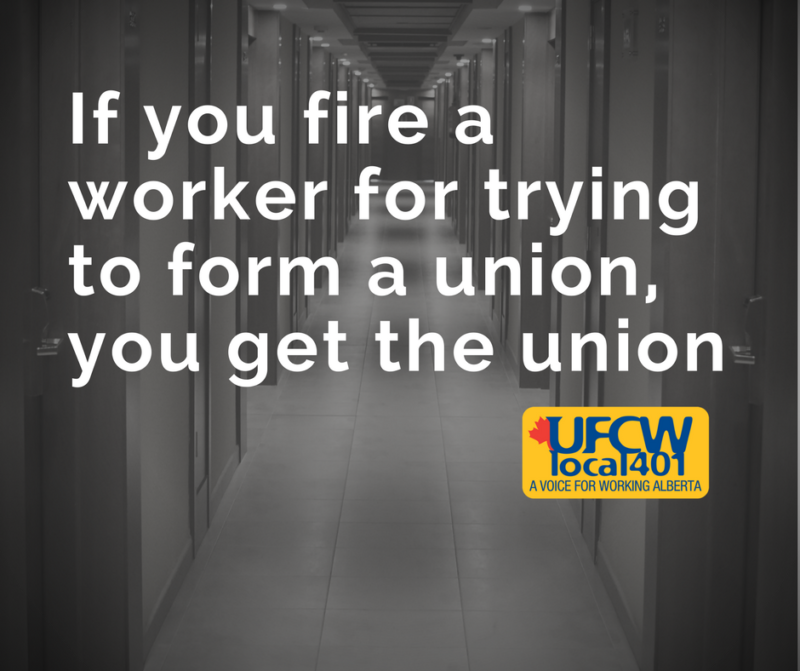 April 20, 2018 – Calgary, AB – When managers at a Hilton hotel in downtown Calgary fired Aaron Doncaster, a known union supporter, they probably thought they were ending a union organizing campaign. But for the first time in thirty years, the Alberta Labour Relations Board has ordered that workers facing illegal employer actions can have their union, in this case, the United Food and Commercial Workers Local 401.

Last summer, workers began talking of starting a union at the Hilton Garden Inn, a newer hotel in the heart of downtown Calgary. Doncaster, a worker rights activist, contacted UFCW Local 401 for support in forming a union.

“Hilton workers were complaining of mistreatment and favouritism, improper pay practices on overtime and tip calculations, health and safety concerns, and an overall lack of dignity and respect from management,” explains Joe Irving, an organizer with UFCW Local 401.

Shortly after the campaign began, Doncaster was terminated. In a Labour Board complaint pursued by UFCW Local 401, evidence showed Doncaster had been illegally fired for his union activities, and so he was offered reinstatement with compensation.

In 2017, the Alberta Government enacted the Fair and Family-Friendly Workplace Act, which among other things, restored powers to the Alberta Labour Relations Board that allowed for remedial certification. In other words, employers who break the law in organizing situations could run the risk of unionization as a remedy for those illegal actions. Between 1981 and 1988, the Alberta Labour Relations Board had these powers. There are similar provisions in other Canadian jurisdictions, like Ontario and British Columbia.

“We understand the Alberta Act was about getting somewhere close to a balance, getting closer to where other provinces are at,” says UFCW Local 401 President, Douglas O’Halloran. “When an employer threatens the livelihood of workers for freely exercising their human rights, which includes the right to join a union, they are really making that decision for workers. Employers should never decide whether workers have a union or not.”

“This is a major victory for workers at the Hilton and for all Alberta workers who want to join a union,” says O’Halloran. “Empowered by better legislation, the Labour Board has sent a clear message to employers who would commit unfair labour practices by seeking to threaten or intimidate workers for exercising their human rights: if you fire a worker, you get the union.”

Doncaster describes the victory as “a new day for working Albertans.” When he learned of the certification, he exclaimed, “thank you to all who supported us through this ordeal. This is the happiest day of my life!”