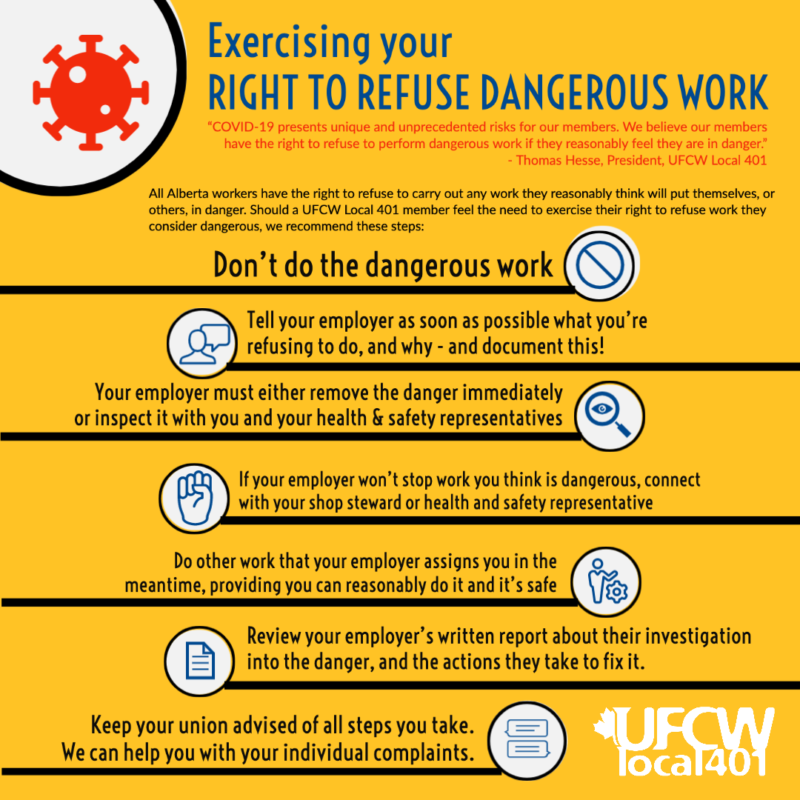 A printable version of this update is available here

This is a special message from President Thomas Hesse for all UFCW Local 401 members at Cargill High River:

Everybody knows that unions have been a voice for worker health and safety as long as they have existed. Strong unions have the resources to go to the media, engage in legal actions, and give workers a voice.

THE SITUATION AT CARGILL IS SERIOUS, AND THE NUMBERS DON’T LIE

COVID-19 is deadly. It has killed a Cargill worker and made people desperately ill. It is reported that 921 of the roughly 2,000 people who work at the Cargill High River plant have now tested positive for COVID-19. There are over 1,500 positive cases now linked to the plant. No one should be surprised that we have looked for the plant to close until it is clearly safe. There are few who disagree with us.

Currently, COVID-19 hurts food processing workers more than others. Between JBS in Brooks and Cargill in High River, there are more positive COVID-19 cases than in the entire provinces of Saskatchewan, Manitoba, New Brunswick, Prince Edward Island and Newfoundland and Labrador combined. Anyone who does not see the seriousness of this situation is burying their head in the sand.

WE ARE TAKING EVERY POSSIBLE ACTION

In late March and early April, there were rumours that Cargill wasn’t doing enough. We investigated and dug deeper, listening to concerns from our members at the plant. Out of an abundance of caution and the desire to save lives and misery, we asked Cargill to temporarily close the plant, for employees to be paid, and to launch a special investigation and process that included our members’ voices. Cargill refused. One of our members later died, and hundreds have now tested positive for COVID-19.

We became louder, and our voices began to be heard. Eventually, Cargill was forced to listen, and production was slowed to an “idle.” The slowdown likely lessened the rate of infection from becoming even worse. It likely saved lives. It was a victory for unionized workers, but it was obviously not enough.

We have taken legal action, and we are continuing to review all legal options, including going to court. There is still much more to do.

OUR ADVICE FOR MAY 4

CARGILL WANTS TO OPEN THE PLANT

We still have grave concerns about the plant reopening. Let there be no confusion: we have made every attempt to work with Cargill to resolve things and make your workplace safe. Even today, we’ve written to Tanya Teeter, Cargill’s Vice President of Labour from Wichita, Kansas, asking Cargill to do what’s right.

In our view, a significant part of the problem has been Cargill’s arrogant attitude and failure to listen. They have put profits ahead of people. But the pressure our union is putting on Cargill continues to change that situation.

On May 3, for the very first time, a special representative of the Alberta Labour Relations Board visited the Cargill High River plant in what we hope will be the dawn of a new day in health and safety at Cargill. Two UFCW union officials were on that tour. Most importantly, there were three employees of the plant who serve as UFCW shop stewards.

Unfortunately, the situation has not been resolved. At this moment, we have been unable to convince any government or legal authority to have the courage to step in and ensure the plant remains closed until safety is assured. Our lawyers are looking at new strategies.

We believe that this plant should close until Cargill has proven that they care about worker health and safety and that it matters more than profits. Unfortunately, our pleas to the Alberta government and Alberta Occupational Health and Safety have fallen on deaf ears so far.

We have not given up. We are continuing to pressure Cargill in every possible way to ensure your safety.

In the court of public opinion, Cargill has already been found guilty. The numbers don’t lie. If Cargill doesn’t act to salvage their reputation, no one is going to buy their beef.
One thing is now crystal clear: Cargill is now on probation. Every minute, every hour, and every day, we believe there could be new ways to watch and police them.

Some positive things are happening. There has been an outpouring of sympathy and support for Alberta’s food workers. So many groups are working with us to be there for you. For example, today, we delivered grocery gift cards to Migrante, a group working hard to build solidarity and deliver essential supplies to those in need. Every Albertan and every Canadian is now watching Cargill. The public wants to know that you are safe when you eventually enter that plant.

Our hope is in each other. Workers themselves can control their destiny by acting in solidarity. As your union, we will be there to support every choice you make.

YOUR RIGHT TO REFUSE DANGEROUS WORK

“COVID-19 presents unique and unprecedented risks for our members. We believe our members have the right to refuse to perform dangerous work if they reasonably feel they are in danger.”
– Thomas Hesse, President, UFCW Local 401