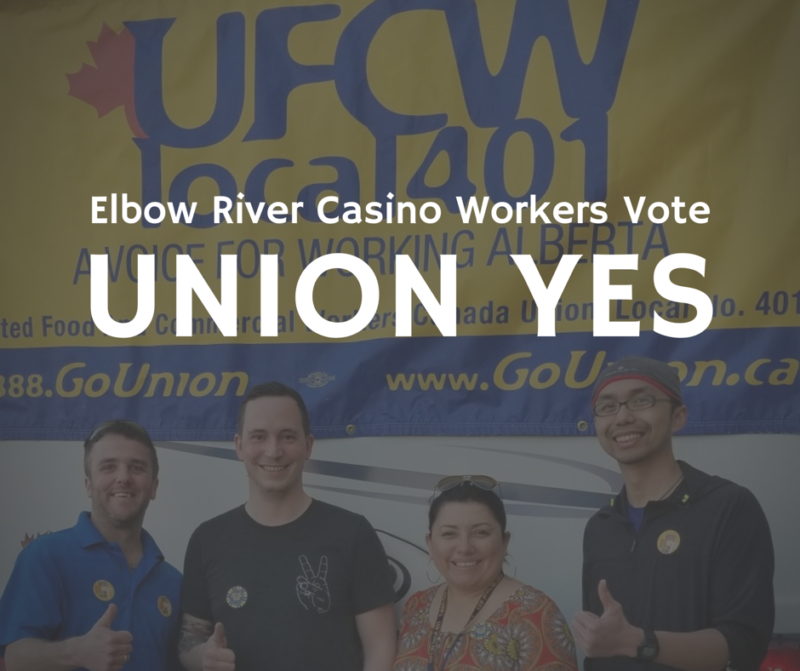 May 10, 2018 – Calgary, AB – Workers at the Elbow River Casino in Calgary are the latest to join UFCW Local 401. A vote of eligible employees was held at the casino on April 28 and 29, 2018. When the ballot box was opened by the Alberta Labour Relations Board today, it was revealed that nearly two thirds had voted to unionize, formally establishing the union in the workplace.

“Congratulations to the employees of the Elbow River Casino, who showed considerable courage, patience, and persistence to create this outcome,” said UFCW Local 401 president, Douglas O’Halloran. “This is a big win for all of those who work in the gaming industry.”

By joining UFCW Local 401, Elbow River workers stand with unionized casino workers at two major casinos in Edmonton, the Grand Villa and Starlite Casinos, both of which have recently undergone multimillion dollar renovations and improvements.

“This campaign was a difficult one, and there are still many outstanding issues with respect to the employer’s conduct during the campaign,” said UFCW Local 401 organizer, Joe Irving. “We were forced to file unfair labour practice complaints against management and others working on their behalf to ensure that casino employees would be able to express their true wishes free from employer interference. Obviously, we’re thrilled with the outcome in spite of the interference.”

Union complaints over employer interference remain outstanding at the Alberta Labour Relations Board and are expected to be heard in the coming weeks.

In the meantime, the newly unionized casino workers look toward negotiating a first collective agreement that addresses the concerns that led to unionization.

“We’ll be now gearing up for proposal meetings and a robust member consultation process,” said UFCW Local 401 Executive Director of Labour Relations, Tom Hesse. “These workers fought hard for their union and withstood significant pressure to back down. They deserve a fair first agreement that reflects the challenges they’ve confronted.”

The United Food and Commercial Workers Local 401 is Alberta’s largest private sector union, representing over 32,000 workers in diverse sectors of the economy, including retail, food and beverage production, hospitality, and gaming industries.