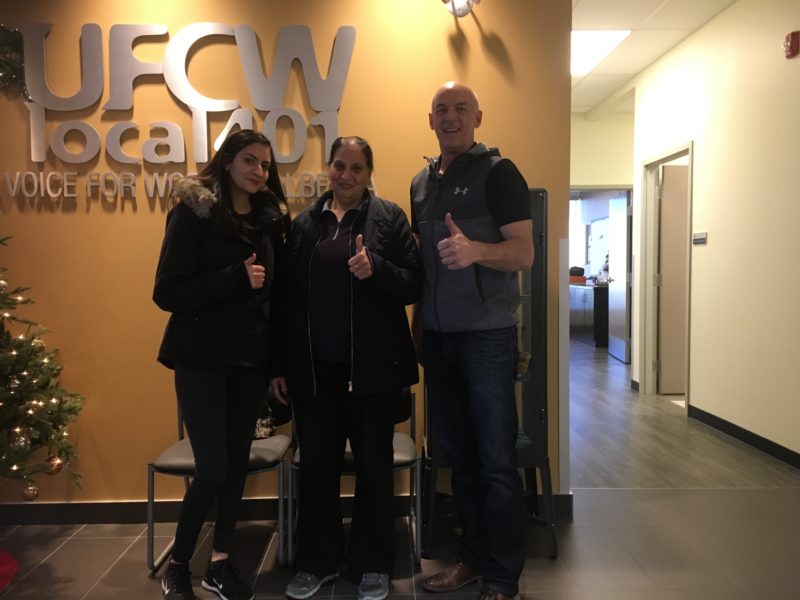 January 10, 2019 – Calgary, AB.  When Harpreet Dhillon started working at Lilydale’s Calgary poultry facility (now owned by Sofina Foods) in April 2000, she knew she had found a stable job to support her young family. Work in the packaging department was fast-paced, but she had a good job with union protections and job security. But by January 2016, Harpreet had developed a work-related injury, and things took an unexpected turn for the worse. She found she was unable to perform her regular duties any longer.

Harpreet saw her doctor and submitted a claim to the Workers’ Compensation Board (WCB). If she was unable to work, she would need income and support. Unfortunately, the WCB denied her claim, saying the demands of her job did not cause her injury. Harpreet knew otherwise.

Even though she knew the decision was unfair, the WCB system was difficult to deal with. English was a challenge for her. Meanwhile, the bills began to pile up.

A solid investigation and representation

Faced with this difficult situation, Harpreet contacted her union, the United Food and Commercial Workers (UFCW) Local 401, and was put in touch with WCB advocate, Keri Grainger.

“When I took on this file,” says Grainger, “I felt that Harpreet’s situation might not have been fully considered by the WCB. I immediately appealed the decision and did my investigation.”

Grainger spoke with witnesses, wrote to Harpreet’s doctor, and sought the opinions of medical experts. She attended meetings at the workplace and gained a clear understanding of Harpreet’s work. But WCB continued to deny Harpreet’s claim.

“Even though the appeal process wasn’t accepting her claim, I still wasn’t satisfied that the system was supporting Harpreet,” says Grainger. “We had to press harder.”

Grainger undertook further investigation efforts and took Harpreet’s case to the WCB Appeals Commission. The appeals process involved many twists and turns, including translation and interpretation issues at one hearing and an Appeals Commissioner falling asleep during another hearing (he ultimately recused himself from the case).

Harpreet’s case came to a favorable outcome in late 2018.

“Keri and Local 401 worked really hard on my case,” explains Harpreet. “She showed a lot of dedication and understanding. I feel relieved that my claim has been approved.”

Harpreet expressed that the help she received from Local 401 was a really good experience, and she encouraged other members to contact the union for assistance if they find themselves in a similar situation with WCB.

Each year, through the work of the Local 401 WCB Advocacy Department, UFCW members win hundreds of thousands of dollars in awards and accepted claims. Union support goes a long way.

For more information and to get in touch with UFCW Local 401’s WCB Advocacy Department, visit gounion.ca/wcb.