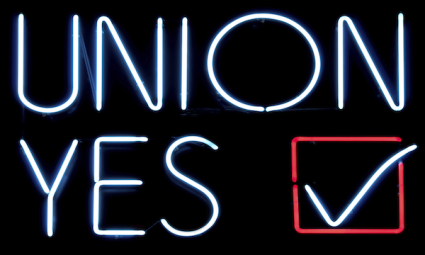 On March 25, members of the G4S Security Guard negotiating committee tentatively accepted an offer for a Union Contract from their management at G4S Security.

The negotiation process between UFCW Local 401, the G4S negotiating committee, and the company started back in September 2014. The process has been a learning experience for many, as this is the first ever Union Contract for G4S guards working in northern Alberta’s CIVEO owned Oil Sands camps.

UFCW Local 401 is proud to announce that G4S guards will receive a 10% wage increase in their new Union Contract. Considering the turbulent financial situation currently hitting Alberta’s Oil Sands, the union is pleased with this huge achievement for our newest members at G4S.

In addition to the 10% wage increase in the contract, members have also won allowances on travel, clothing and tools as well as improved language on seniority and the discipline process at work. Most importantly, in this Union Contract members at G4S now have fair representation at work through their union.

Members at G4S will now have a chance to review this new memorandum offer before voting to ratify the contract. UFCW Local 401 will hold a telephone town hall with G4S Security Guard members to address any questions about this new memorandum. Once reviewed, it will be up to the membership to ratify the memorandum, the union and G4S negotiating committee members will respect this decision.

Recent fluctuations in oil prices have caused many people living in Alberta to face economic struggle and an uncertain financial future. This Union Contract for G4S Security Guards will counter the impacts of this recession by ensuring job security and wage increases for our new union members.

“We are very pleased with the outcome of these negotiations as G4S guards at CIVEO are the first security company to unionize in the Alberta Oil Sands. As well, negotiating committee members overwhelmingly support the new memorandum agreement,” said UFCW Local 401 Director Chris O’Halloran. “Congratulations to the G4S members on achieving their first contract with Local 401.”

Should you have any additional questions, please contact UFCW Local 401 Union Organizer Saba Mossagizi at 780-920-3773 or smossagizi@ufcw401.ab.ca.