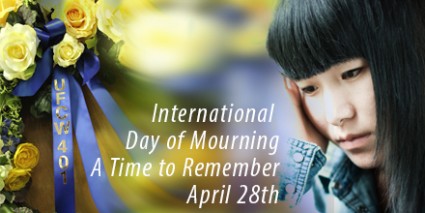 Every year on April 28th the world takes a moment to remember those who died during the course of their job.

Officially recognized in Canada since 1991, the National Day of Mourning is intended to not only remember and pay our respects to the victims and their families, but also to reaffirm our commitment to lowering and ultimately eliminating workplace accidents and deaths.

According to the government of Canada’s own website, from 1993 to 2013, nearly 19,000 people died due to work related injuries.  While this number is grim, it only represents the numbers that are officially recognized by the Association of Workers Compensation Boards of Canada.  The reality is much worse.  Official statistics also fail to recognize fully the many workplace diseases that affect and ultimately kill many Canadians.

Work related injuries are greatly reduced simply by having a union in your workplace but we have a lot of work to do. Though we are always looking for ways to hold employers accountable for neglect that causes accidents, we are also committed to educating and supporting our members in the area of safe work practices and knowing their rights, as with the obligation of refusal to do unsafe work.

Join us on April 28th for various events in your area.