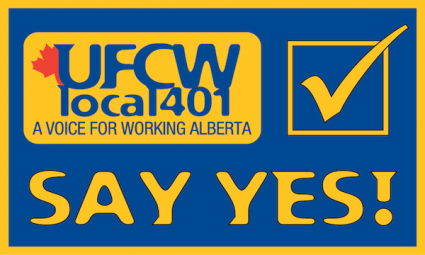 On July 10, 2015, the employees of Kaybob Lodge chose UFCW Local 401 to be their union to represent their rights and interests at work. The campaign leading up to the July 10th vote was long and challenging for CIVEO workers at Kaybob Lodge.

Unfortunately, as is the case in most union organizing campaigns, the employees of Kaybob Lodge had to withstand a barrage of threats and intimidation from their employer who took a strong anti-union position in the campaign. The employer’s propaganda and fear mongering was so ingrained in the workplace that some employees still fear their association with the union could negatively impact their livelihood.

It is most regrettable that rather than allowing employees to exercise their right as Canadian workers to join a union in peace, a right every Canadian worker has, CIVEO opted instead to bully those that stuck their neck out to make positive change for themselves, their families, and their fellow workers.

With the mere hint of an organizing campaign taking place at their workplace, the employer pulled out all the tricks to dissuade workers from pursuing their rights at work through unionization. Employees at Kaybob Lodge were given a $4.00/hr wage increase in hopes they would drop their campaign to bring a union to the Northern Alberta camp.

However, this increase did not fool employees who saw right through the intentions of the company; they knew they needed a proper union contract to aid and protect them in the long run from their bullying employer.

The employees of Kaybob Lodge proved to be steadfast in their fight for equality and fairness and voted to have the protection of a union at work. All of us here at UFCW Local 401 are delighted to welcome our new Sisters and Brothers into our union. And as we celebrate now, we also look forward to the work that lies ahead of us to ensure we provide excellent union representation to all of the dedicated workers at Kaybob Lodge.

An immediate test facing us all is the continued campaign of lies spread by the employer intended to create confusion about the union, something UFCW Local 401 President Doug O’Halloran is taking personally. “I spoke with Civeo on the afternoon of July 15th, and they assured me that no one in management had the authority to say if workers voted for the union that the camp would close within 30 days because that was not part of any discussion between Civeo and their client (Kaybob Lodge),” said President O’Halloran. The President goes on to explain that there is always a clause that allows clients to get out of their contract, in this case it is 30 days though at other times it is up to three months.

“Civeo provides great services through you, their employees, and the client isn’t going to have a knee-jerk reaction and cancel the contract because you joined UFCW Local 401. We will proceed carefully to negotiate a contract that will work for you and Civeo and we will be putting together a negotiating committee made up of you, the workers.

As for what is next for CIVEO employees at Kaybob Lodge, President O’Halloran assures workers, “Again keep the faith, we are there for you.”