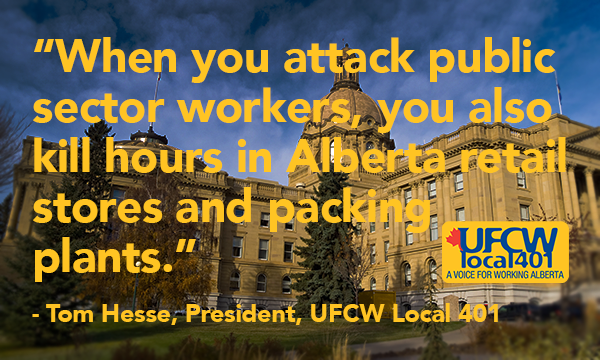 October 24, 2019 – Edmonton, AB. The United Food and Commercial Workers (UFCW) Local 401 strongly denounces the austerity budget of the United Conservative Party government, which was delivered in the Alberta Legislature today. The UCP government has imposed severe cuts on key public services relied upon by working Albertans. These cuts are deeper and even crueler than many had imagined.

Newly elected UFCW Local 401 President, Thomas Hesse, and Secretary Treasurer, Richelle Stewart, attended the Alberta Legislature today and were joined by dozens of fellow worker advocates in bringing the voices of working Albertans to the halls of government.

“In so many ways, this is a budget for the bosses,” remarked Stewart. “Hard-working Albertans have been told by this government that they do not deserve raises and that their jobs should be cut. Meanwhile, this government gives tax breaks to the wealthy with no guarantee that a single job will be created that way.”

The UCP was elected in April with the promise of spurring an economic turnaround for working Albertans suffering through a slumping resource economy that began during the last conservative government of Jim Prentice’s Progressive Conservatives.

“This budget is evidence of the UCP’s swindle of Alberta voters,” said Hesse. “Under the NDP government, public sector workers sustained economic activity in the retail and food processing sectors. These cuts will only destabilize working families, the true bedrock of our economy.”

“It’s basic economics: when you take money away from working Albertans in the public sector, they buy less food. In turn, you kill hours – in retail stores and in packing plants – that workers in the private sector desperately need. This government is short-sighted and simply disrespectful of working Albertans.”