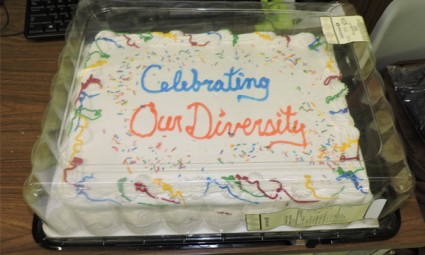 On August 8th, members of UFCW Local 401, along with their Union Representative Sam Nuako, held the Local’s third Lunch & Learn. Jointly promoted with the employer, these Lunch & Learns focus on various topics designed to raise awareness of all the benefits of membership in Local 401. And Sam continues to make the rounds at his Safeway-Sobeys stores with these mini educational member assemblies.

Shortly after the previous Lunch & Learn at the Riverbend Safeway-Sobeys store, Millbourne Mall Store Manager Boris Maik approached Sam and expressed his interest in having one of these at his store after seeing what a hit it was at the Riverbend store. Sam and Boris immediately began making plans to see that happen, and it was yet another great success!

“The theme for the Millbourne event was “Celebrating our Diversity” and stemmed from the fact that this particular store has a very culturally diverse workforce, which has always been a big part of their strength” Nuako says.

Like the previous Lunch & Learns, this one was also member-driven and directed. The planning committee members included the Store Manager and eight UFCW 401 members (not counting a host of other members who volunteered to assist), who all worked around the clock to ensure its success. And indeed, it was. They had planned such a grand event that the planning committee was divided into several sub-committees:

Familiar topics included things like: the benefits of being a UFCW member, webCampus, available part-time benefits, and scholarships. The members even discussed striking a diversity committee in the near future to develop initiatives on an ongoing basis that would promote diversity and inclusiveness within the workplace.

Shop Steward Norma Johnson also did an excellent job in speaking to members about the details of the 100% employer funded part-time worker benefits plan, and all the rewards associated with being members of 401. Norma’s rich experiences and knowledge gained during her long service as a Steward came into play as she delivered the goods to an eager-to-listen audience.

We were also very pleased to hear the store manager, Boris, talk about what the union offers the workers and he emphasized that the work of the union is not just dealing with complaints and handling formal grievances, and that we in fact offer much more. He added that the relationship between Safeway-Sobeys and UFCW 401 has entered a “new era – an era of cooperation and collaboration”, which was music to Sam’s ears, as that has been his prime goal – collaborative service delivery.

The discussions around webCampus and the Migrant Worker Scholarship attracted quite a lot of attention, due in part to the large immigrant constituency of the workers in the store.

The atmosphere that day can best be described as festive. Some members even brought their grandchildren for the event and many of the store’s younger members were eager to get involved and learn all they could in the time provided.

In keeping with this festive flavour, members also provided food from around the world, calling it their “ethnic potluck”! Savoury delights, including mouth-watering desserts, from all corners of the world included East Indian, Pakistani, Ukrainian, Chinese, African, and North America to name a few, and were served in abundance. In fact, there were so many food options that the cake 401 provided had to be put in the freezer and saved for a rainy day. Sam also got in on the action and provided a Ghanaian dish that he made himself just for the event.

Attendance was excellent and the mood was as vibrant as the attire people wore to celebrate their cultures. And this is what really set this event apart from the others. Members who were not on shift that day also dressed up in their traditional/cultural attire, as did Sam.

The icing on the cake, so to speak, was 401 member Uswa, who stayed behind after the event and offered free henna tattoos to some of the members. Henna tattooing has its roots in a number of different cultures around the world and is an elaborate and decorative art form using a paste that includes turmeric in order to stain the skin temporarily. Elaborate and ornamental designs are typically drawn on the hands or feet and they wash off after a few days or weeks. It was the perfect way to top off such a celebratory event. Thank you, Uswa!

We wish to thank all the members of Millbourne Safeway, particularly the planning committee, for doing such an excellent job. We also wish to thank Store Manager Boris Maik for his interest in this event and his support in ensuring its success. 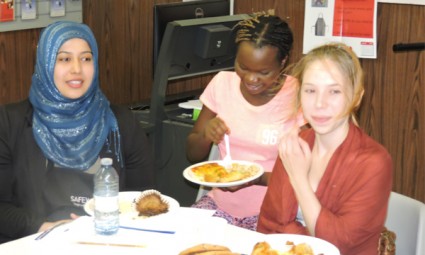 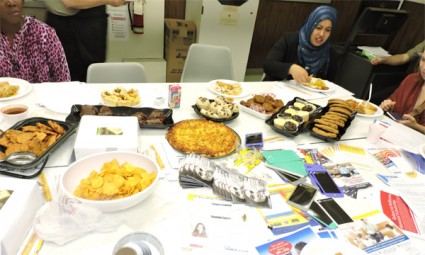 Taking in all this information is hungry work! 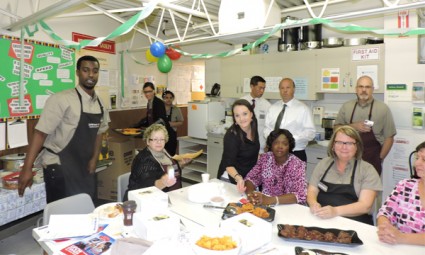 Store Manager Boris hanging out with his fabulous crew 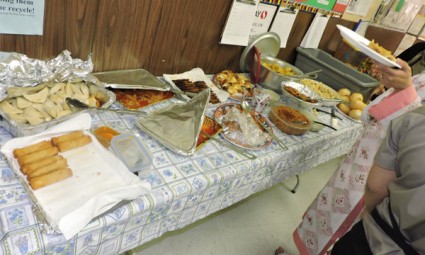 Mouth watering delights from around the world! 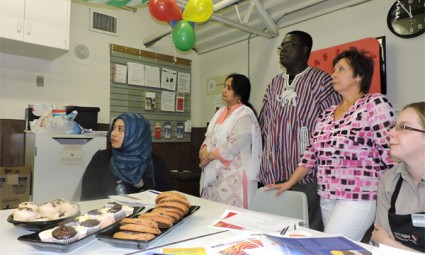