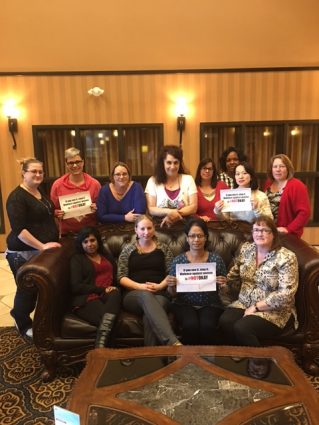 Nov. 25-The Int’l Day for the Elimination of Violence Against Women

The #NOTokay Campaign Gets Underway on November 25th

Women and girls often find themselves in situations where they are at risk of being victimized or marginalized. While the women’s movement for equity and equality has been decades in the making, progress in many areas has been slow – arduously slow.

This is certainly the case where violence is concerned.  We don’t need to look far for an example of this.  Recently, Alberta politician Sandra Jansen spoke out in the strongest terms about the need for us to collective stand together to end the violence.  Her story, while devastating, is all too common as a female politician.

It doesn’t take long to find horrific stories about sexual assault committed on a daily basis where women not only suffer at the hands of violent men, but then subsequently suffer at the hands of an antiquated legal system where both law enforcement and the courts once again victimize the women suffering from this violence. Women have to defend every aspect of their lives in both the law courts and the court of public opinion and are often left more damaged than before their journey for justice began.

This is largely due to the culture of fear and ignorance that we are steeped in. “Rape culture” allows these attacks and injustices to continue and no woman or girl is safe as long as this culture persists.

Women are often unfairly scrutinized in boardrooms, on the shop floor, and in political office. Being called “nasty”, “bitchy”, and “prude” for simply standing up for themselves and stating their well-considered opinions. This culture of marginalization is often subtle but in no sense harmless. It leads to much more serious issues like the denial of the right to safety on our streets, in our workplaces, and in our homes.

This year, join us in calling for an end to violence against women. Join us in the #NOTokay campaign by sending us your picture to 401 Communications Rep Christine McMeckan at: cmcmeckan@ufcw401.ab.ca with the subject line “#NOTokay picture”. Also, please check out our Facebook and Twitter pages between November 25th-December 10th and share the pictures and posts with your social media contacts to raise awareness and be a part of finally ending the permissive culture of violence against women.

For more information and ideas on how to contribute, check out: notokay.ca.