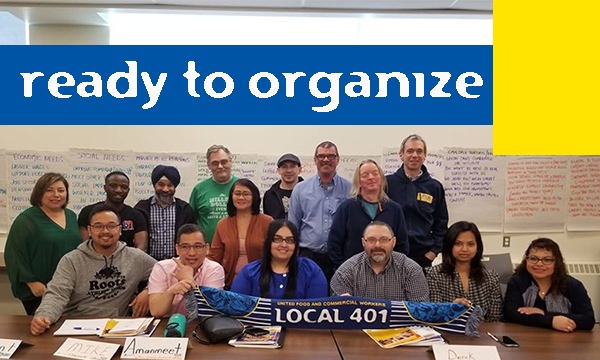 Calgary, AB – April 4, 2019. As one of Alberta’s largest and fastest-growing unions, the United Food and Commercial Workers Local 401 has learned to organize in bold and innovative ways. In doing so, our union helps hundreds of workers form a union at their workplaces each year. At the end of March, Local 401 members gathered in Calgary for a week-long union organizer training session.

Facilitated by staff from the UFCW Canada National Office, the course brought together a dozen UFCW members from across the province and from a variety of workplaces for an in-depth look at what it takes to organize a union in non-union workplaces.

Participants received an introduction to the importance of organizing new workers, the lack of rights and enforcement issues faced by non-union workers, and strategies on how to encourage union members in their own workplaces to get involved in growing an even stronger Local 401.

An important part of the course involved tackling the challenges faced by organizing new workplaces and how changes by the NDP government has protected workers seeking to join a union.

Staff from Local 401 and the National Office shared invaluable real-life examples of organizing successes and failures.

“Organizing isn’t about numbers,” said one participant. “It’s about how we as union members can help others gain a voice in their workplace and grow our collective strength as a union. Workers can win if they are clear about what they want, but getting there is usually not easy.”

“We’re pleased to have been able to offer this kind of training to our members,” said UFCW Local 401 President, Douglas O’Halloran. “Through organizing, we gain a fresh perspective on what we have and don’t have in our unionized workplaces, but we also learn a lot about what it means to build solidarity and confront big challenges in a unified way, not alone.”

With this training under them, participants were excited to get involved in Local 401’s numerous organizing campaigns happening across the province.

Future organizing courses are coming. Local 401 members wishing to participate should check our calendar at gounion.ca or speak with their Union Labour Relations Officer.

With 32,000 members, the United Food and Commercial Workers Local 401 is Alberta’s largest private sector union, giving a voice to working Albertans in industries as diverse as food retail and production, warehousing, hospitality, entertainment, and education.