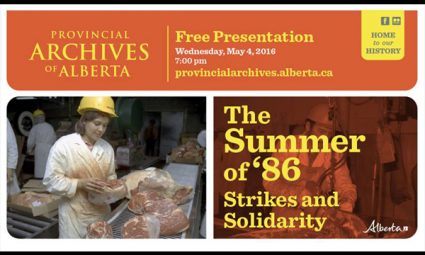 Provincial Archives of AB Presents The Summer of ’86 Strikes & Solidarity

Join us at 7 p.m. Wednesday, May 4 for a panel discussion inspired by the films shown during the Provincial Archives of Alberta’s recent film night, Meat on the Move: The Edmonton Meat-Packing Industry on Film.

The panel – composed of Alvin Finkel, Winston Gereluk, John Ventura, and Don Bouzek will take a look at the six major labour strikes that marked the summer of 1986.