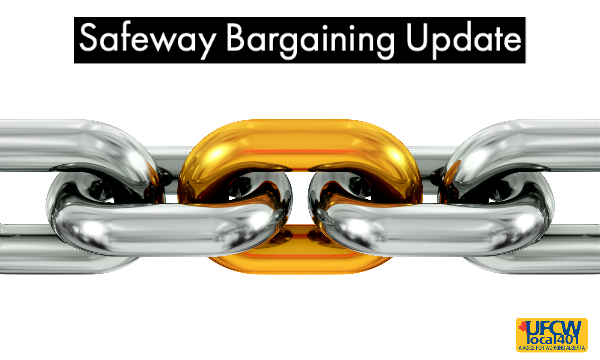 July 16, 2020 – Calgary, AB. Safeway negotiators returned to the bargaining table on Monday to meet with your Local 401 bargaining committee. Local 401 is now bargaining with a 79% strike mandate. Safeway management has now met the legal requirements to commence a lockout of Alberta Safeway employees if they so choose.

Bargaining commenced on Monday with the company asking the union to agree to binding arbitration on all outstanding issues.

Local 401 has resisted this. In addressing company negotiators, President Thomas Hesse said, “our union is about democracy and whatever the proposed settlement might look like, it must be placed in front of Alberta Safeway union members for a vote.

Bargaining has continued over the last few days and progress has been made. Local 401 has been gratified to receive the support of the Alberta Union of Provincial employees and their 95,000 members. Yesterday, the Calgary Firefighters’ Union and the International Association of Firefighters also weighed in, offering their solidarity with the cause of Local 401.

A government appointed mediator continues to be involved in this process. Today, a tentative agreement has been reached on most issues, but a half dozen key issues remain outstanding and the parties are at loggerheads and at impasse on those issues.

The mediator is now in a position where she could write recommendations on the six remaining issues, and the union and the company have made arguments and representations to her.  Her report is expected to be released on Monday on those final issues.

The mediator’s report is not, and will not, be binding as an arbitrator’s decision would be. Local 401 has insisted that any mediator recommendation, and the overall settlement, must be voted upon. President Hesse and Treasurer Richelle Stewart, at the time of the strike vote, promised Safeway members that there will be another vote, and they will deliver on that promise.

“Tom and I are about the pursuit of democracy and transparency, and we are simply following through on our firm belief that the direction of this union should be determined by the members themselves,” Stewart says.

As a final note, our local union and the 401 membership would like to thank our bargaining team, and bargaining committee, who have been pushing the company very hard over the last few days.