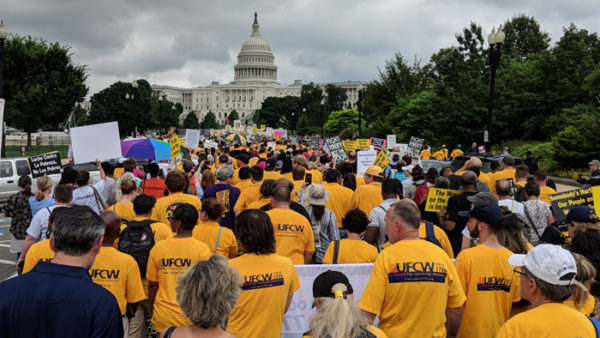 Our Safeway union bargaining committee has been in negotiations with Sobeys again this week, and as we get further into the issues that affect us, we need to start talking about important topics that have a direct impact on our ability to win at the bargaining table.

Our committee has been working hard on issues that relate to the rights of Safeway employees to not only a healthy and safe workplace but also a workplace where they are defended when facing abusive customers and are treated with dignity and respect.

The reality is that working through these issues takes time, and the complexity of the issues before us means they have wide-reaching impacts. We are continuing on a steady, deliberate path towards the best deal possible for our members.

Our union bargaining committee – joined by Safeway members who have attended negotiations on their own time – has focussed on sharing the many experiences that have been shared with us by members across the province. They’ve given voice to our fears and frustrations as customers have become more aggressive. Management needs to proactively defend us in these situations. Many of you feel they haven’t.

As negotiators, we must be persuasive. We might use arguments to convince the other side to agree to our positions. But talk only goes so far. Ultimately, successful negotiations require what we call “leverage.” Our leverage is the measure of our strength, the muscle we must have in order to bring employers to the bargaining table, to hear us, and to respond to the issues they raise. Employers give nothing away easily. They tend not to do the right thing simply because it is the right thing to do. Sobeys is no exception.

Leverage comes in many ways. It could come from the law and the duty to bargain in good faith. It could also come from pressure from customers and the public. These are important mechanisms available to us.

However, in labour relations, the ultimate leverage wielded by workers in negotiations with their employers is the strike. Simply put, a strike is the withdrawal of our labour to put economic pressure on an employer to come to the table and agree to our way of seeing things. The right to strike in Canada has been upheld time and time again in the courts and is an important part of Canadian society.

Nearly anyone with any close experience with strikes would agree they are not fun. They are, however, an important tool in our toolbelt. A realistic threat of a strike can convince employers to come to the table and hear us. While some strikes get the job done, others are less successful. There is simply no one-size-fits-all solution to any of these circumstances.

For grocery workers across North America, 2019 has been a year of contentious job actions and strikes, each with varying contexts, impacts, and results. When faced with our own challenges, it’s important to also look around us.

In February 2019, UFCW locals representing 31,000 Stop & Shop employees in Massachusetts, Rhode Island, and Connecticut authorized a coordinated strike affecting 249 stores. This came after management presented severe financial takeaways in negotiations, including the elimination of premium pay on national holidays and Sundays, no raises, reduced pension contributions and increased healthcare costs. On April 10, 2019, as talks broke down, the company increased its dividend to shareholders by 11.1%. A strike was called the next day.

For 11 days, UFCW Stop & Shop members struck their employer. Delivery and warehouse workers represented by another union stood with us and refused to cross the UFCW picket line, while dozens of politicians, including prominent 2020 Democratic presidential candidate nominees, joined picket lines in support of our members there. It has been estimated that the strike cost the company $20 million in revenue for each day of the strike. It was a big strike.

On April 21, 2019, the company and the workers reached a deal that included the preservation of health and pension benefits and pay increases. It was widely characterized as a “powerful victory” and one of the most successful recent strikes in the US – it was short and effective. It is too soon to tell what the impact of that strike has had on the company’s reputation, but it should serve as an important lesson to selfish employers seeking to take from their hard-working employees.

Sometimes the timing of a strike is seen as key to its success. Just as that New England strike was beginning, another strike was ending much closer to home. In Saskatoon, close to the end of 2018, more than 900 Co-op employees, represented by UFCW Local 1400 in Saskatchewan, decided to strike their employer before the Christmas season in an effort to fight off employer takeaways and win some much-needed improvements to their union contract.

Commentators noted the disconnect between the values of the cooperative movement – altruism, equity, and community – and the positions of management, who sought the imposition of different rules for newer employees. The existing employees decided to take a stand for those who didn’t work there yet.


While the community rallied behind the striking workers, management persisted in its position, seemingly unconcerned about the public impact of its image because of the strike, their own betrayal of co-op values, and even the financial impact of a strike during the busy Christmas season. That strike lasted five months – across over 20 picket locations – through one of the coldest winters in Saskatchewan’s history.

In April 2019, an agreement was reached that saw wage increases and signing bonuses for existing union members, but there was also the introduction of a new tier in the contract.

Throughout the strike, Co-op management refused to budge, and negotiations were difficult. An employer a fraction of the size of Sobeys, Co-op was willing to let their employees sit on picket lines over Christmas in order to achieve their demands.

Earlier this month, 47,000 union workers at Albertson, Ralphs, and other grocery chains in southern California nearly went on strike over their contracts. In June, during difficult contract negotiations, union members voted to authorize their UFCW locals to take strike action if necessary to secure important wage gains.

Massive preparations were undertaken, including rallies of support from community members throughout southern California. Union members came together and showed their strength and support for each other in big, public ways.

At the very last moment, with nearly 500 grocery stores in the region about to strike, a deal was reached and voted on by the members. Workers won by showing grocery store owners that their strike was credible and would have wide-ranging support. It was an important reminder that employees are also community members, and when an employer seeks to take away from the livelihoods of communities, they will push back.

Strikes can be long or short, but it is unwise to ever assume the latter. The timing of strikes can create leverage, but not on their own. They can be incredibly effective, and they can be difficult. In some ways, just showing our ability to strike can be the only weapon that is needed.

We are preparing now

Our first priority must always be to get the fairest deal possible without a strike, but it would be irresponsible to not consider and prepare for the real possibility of a strike with Sobeys over our Safeway contract in Alberta.

While we are still negotiating a number of important issues at the bargaining table, it is important that we prepare now for a strike. In our next update, you’ll see a lot more information about our preparations, and we’ll be asking for your feedback on what you are prepared to do to help us gain more leverage at the bargaining table with Sobeys. We really have to start getting ready. The time is coming.

Our next bargaining dates with Sobeys will be held November 5-7, 2019, in Edmonton. Safeway union members are welcome to attend negotiations to see the process for themselves. If you would like to attend, please just let us know by reaching out to your Union Labour Relations Officer for the details.