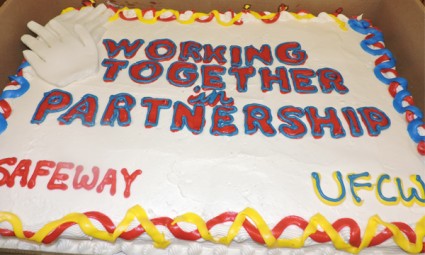 As expected, the UFCW 401 Lunch & Learn at the Riverbend Safeway-Sobeys store (8858) was another successful event and was very well attended by members, both on and off shift. The success of this, like the previous Lunch & Learns, is due to the fact that the event was member-driven along with guidance from Union Representative Sam Nuako.

Topics included details about available part time benefits, as well as some of the other many advantages of membership in UFCW like, webCampus (UFCW Canada’s FREE online learning program), scholarships and other various topics relating to the benefits of being a part of Alberta’s largest private sector union.

The many topics covered were largely explained to all in attendance by 8858 Shop Steward Sandi Maik. Sandi has the weighty task of being the sole Steward at the store and she was incredibly adept at showcasing the materials covered. Shaun Jacobsen, who was a guest facilitator from store 8921, along with contributions from Union Representative Dee Mae Beler, and everything went smooth and the members learned a lot more about their union.

Recognizing the clear and urgent need for more Stewards in this store, Sam focused on recruitment. Sam was particularly interested in the wonderful diversity in the store and took steps to ensure his recruitment involved a focus on encouraging immigrant and visible minority members to get involved.

“I spoke on UFCW 401’s proposed Diversity Committee and the need for immigrant and visible minority members to get more involved. Having only one Steward at the store, I spoke passionately about what it is to be a Shop Steward and invited members to step in and see if they would be interested in assuming that role at their store. At the end of the event, three members filled out a recruitment form (dubbed ‘I Think I Am Ready To Give It a Try’) to enroll for the next Steward training”, Sam reports.

It was such a success for all who were there, that Sam was approached towards the end of the event by a manager from another store (8908) and asked if they could meet afterward with the planning committee of the Lunch & Learn so they could organize a similar one in his store. Sam says it best, “that was an “alleluia” moment for me!”

As we thank the Planning Committee members of this event along with each and every member at store 8858 for their participation, UFCW also wishes to extend its gratitude to Riverbend Safeway Store Manager Dave Chizen for his co-operation. Dave singlehandedly barbequed lunch for everyone, donated door prizes to match those of the union, and even suggested the theme for the event. Dave rightly expressed his appreciation to the members for being so hardworking and dedicated, especially during the initial transition period from Safeway to Sobeys.

Many thanks to all and congratulations on a job VERY well done! 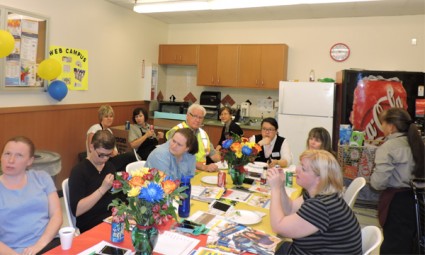 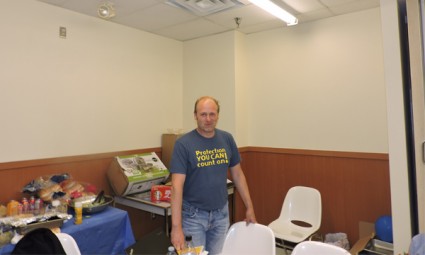 Guest facilitator, Shaun, caught off guard by the UFCW paparazzi 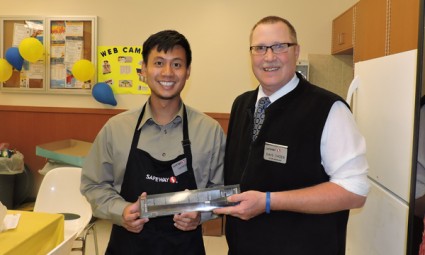 Prizes to be had throughout the event! 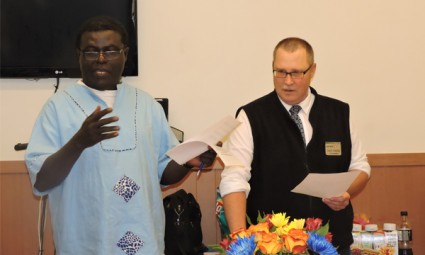 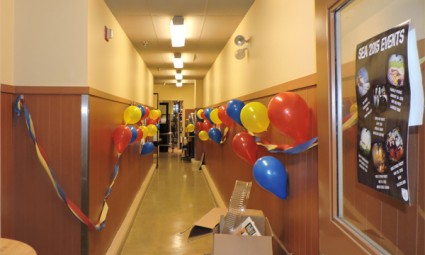 Evidence of the party was all over the store