There can be no doubt that everyone is talking about it. Safeway is enjoying profits from the pandemic. Safeway employees need to be treated with respect and to be valued.

In the shadow of the powerful strike vote, where Safeway employees have spoken so clearly, Sobeys has now agreed to return to the bargaining table. Bargaining sessions are now scheduled be held the week of July 13th with the assistance of a government appointed mediator. Clearly, Safeway employees are not looking for a fight but they are demanding fairness.

As we speak in the media about your issues and the company feels the pressure of the strike vote, Safeway is also making moves to apply pressure to the situation. They have now applied for a government supervised lockout vote. In that process, a few company officials typically put a couple of ballots in a box to support lockout action. It’s kind of a ridiculous process as only a few of them participate. Our strike vote involved thousands of employees. In fact, it was a record turnout.

Just as unionized workers can threaten a strike; a company can threaten a lockout. Technically a strike can now occur with 72 hours’ notice, and after the company takes its lockout vote they can lockout employees with 72 hours’ notice. We believe that if the company actually tried to lock you out, that customers would view it as an act of bullying and it would backfire on them with millions of dollars of lost revenue.

It is gratifying to have taken our strike vote already because if we did not, the company could have moved to lock you out and essentially forced you to come back to work after a short period of time without the wages, benefits, and protections of your Collective Agreement and union. If the company makes any efforts to lock you out in the coming months because you have taken a legal strike vote, you could legally respond by going on strike. In this sense, taking a strike vote is, and was, an act of self defense.

The good news is that, notwithstanding all the tough talk and sabre rattling, the strike vote appears to be facilitating a circumstance where the company is showing a new interest in negotiating. Sometimes it takes some heat for bargaining to come to a conclusion. Simply put, the threat of a strike and a lockout can create an environment where the situation feels so serious, and the stakes are so high, that a new deal can come together. It is well known in negotiations theory that bargaining can be enhanced under pressure. Instead of just wanting to make a deal, the parties have to make a deal.

You will have another vote

Please be reminded that no one will be asked to make a final decision about striking without first having a vote on whatever company offer is on the table. Also, the company would not be able to lock you out if as a result of that vote, a new union contract is concluded. There can be no strike or lockout if there is a settlement.

“We look forward to returning to the bargaining table”, UFCW 401 President Thomas Hesse said. “We’ve always wanted to make a deal, but that deal must be acceptable to our members and it must be a fair deal regardless of how difficult the economic environment is in Alberta.”

Secretary Treasurer Richelle Stewart adds, “In bargaining, and in the coming months, our goal is to make sure our members can make a fair living while making sure that the company does not become nonchalant about the continuing risks of COVID-19.” 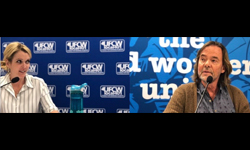 On behalf of President Thomas Hesse, Secretary Treasurer Richelle Stewart, all of our staff, Executive Board, Stewards, and activists, please accept our best wishes this Canada Day. We know that a characteristic of Canadian society has always been the desire to think as a collective and to be kind to each other. During these very troubled times, let’s all continue to reach for that goal.