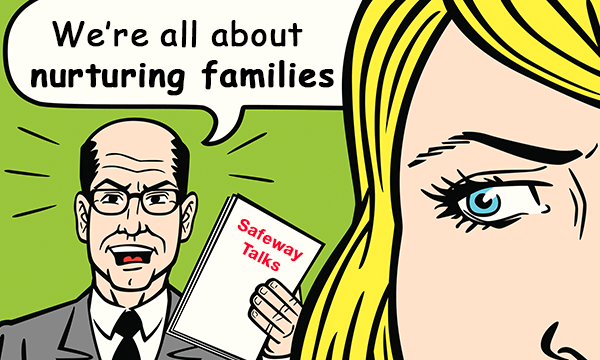 Safeway “Talks”… But they don’t listen

They don’t listen, answer questions, and they’re not negotiating fairly!

Safeway management offers communications with their employees. They often say nice things obviously intended to reassure you and keep you on side with their perspective. Management wants you to keep coming to work, to behave, to face frustrated customers, and to generate profits for the Sobey family.

In a recent piece of correspondence, Scott Chollak, Sobeys’ new Vice President Operations for Alberta, speaks openly of the company’s recent economic successes and wellbeing. The upswing in Sobeys’ business is well documented in recent press and in the company’s own pronouncements. Check out any of the following links to read more:

Against this backdrop, Mr. Chollak “talks” about the company’s intention to invest in the Safeway brand in one breath but warns that some Alberta stores are not profitable in another breath. With very little warning, Sobeys announced in May the closure of its Southland Crossing Safeway store in Calgary. The company has also made it clear that it wants to convert some existing Safeway stores into discount FreshCo stores.

It’s true. Safeway does like to talk to you.

This can be confusing. Employees wonder who to believe. Employees are experiencing anxiety and frustration about an uncertain future.

Safeway does “talk,” but they have refused to reveal the truth to you. At union negotiations, we continue to demand that the company reveal the truth about their plans for Alberta Safeway stores. They say they have specific plans for certain “target” stores to be converted to FreshCo stores or ethnic speciality stores called “Chalo.” Yet when asked directly about details on which stores these might be, or even the number of stores that will be affected, Sobeys refuses to answer. Instead, they suggest that they would be willing to enter into a SECRET AGREEMENT only with negotiators that speaks to some of these details.

From the very beginning of negotiations, we have adopted a policy of complete transparency with our members. You have never received the type of bargaining information from your union that you now receive. Each and every Safeway employee in Alberta is invited to our bargaining sessions.

If you come to bargaining, you can ask the company for yourself any questions you might have about the future of your store or your career.

Safeway might “talk,” but as noted, they won’t answer questions. Also, they’re simply not listening. We have told them in bargaining, in a collaborative and sensible way, that they should balance their business needs with the needs of employees. They complain that bargaining isn’t going well.

BARGAINING IS STUMBLING BECAUSE SOBEYS WON’T ANSWER QUESTIONS AND WON’T AGREE TO MOST OF OUR STRAIGHT-FORWARD AND SIMPLE PROPOSALS.

For example, Sobeys will not even assure their staff in writing and in the collective agreement that you cannot be disciplined without “just cause.”

The effect of Sobeys’ approach is to frustrate and slow bargaining. Still, we are prepared to talk about the future of the business and the potential introduction of other banners, like FreshCo. But if the company won’t reveal any details, we are left to bargain in the dark.

While we have said NO to FreshCo as a concept, we continue to keep an open mind and will confront the issue of store conversions if Sobeys comes clean and their bargaining perspective doesn’t leave employees’ fair interests out of the equation.

We are forced to imagine a worst-case scenario where a large number of stores are converted to a FreshCo banner. Could that affect 30 stores? What does that mean for our members?

FreshCo stores in other provinces typically don’t have meat cutters or deli clerks, floral shops, bakeries, or coffee bars. In fact, some departments may even be contracted out to a third party. There is a FreshCo in Richmond, BC, where we are advised that there is not a single full-time employee that is a union member. Stores are franchised, employment relations are a shaky formula where you must bow to the store “owner,” who worked right next to you on the shop floor. Safeway wages and benefits are gutted, and no FreshCo employee in another province enjoys a collective agreement that even resembles what Safeway employees have. FreshCo represents a gutting of the rights Safeway union members have, and it could mean EXTRAORDINARY JOB LOSSES.

These are simple truths. They aren’t mentioned in “Safeway Talks.”

What does FreshCo really promise employees?

Another concern revolves around whether or not FreshCo would even survive in Alberta. The only comparable format in this province to what the company describes is a No Frills store. It is estimated that this format has had very limited success here. Our research indicates No Frills captures less than 4% of the Alberta market.

Safeway “talks.” But they haven’t told you this, have they? In fact, a Sobeys official admits that Superstore is the “big [discount] dog” in Alberta. Superstore has, we believe, roughly 20% of the market share in Alberta. And let’s be clear, Superstore employees enjoy a solid union contract and representation rights far in excess of any FreshCo store.

Safeway “talks.” But you will notice that all of their communication either glosses over the issues we describe here or ignores these matters completely. Union members agree that Safeway “talks” but assert that these words are empty. We’ve heard some union members say that Safeway Talks “bullshit.” This is harsh to say and not a phrase we want to repeat, but it is important to understand the range of emotion and frustration that Sobeys has generated among Safeway employees on account of their FreshCo proposal.

There can be a natural desire to turn your head away from all of this or to call it all “propaganda.” Some employees have quit or will look for other jobs in this environment. Some senior employees hope that Sobeys will be generous with them and offer buyouts for them to leave, or at the very least, present them with some hope for some job security into the future.

WE CAN SAY THIS WITH CERTAINTY: THE BEST OUTCOME TO BE ACHIEVED WITH THE MULTI-BILLIONAIRE SOBEY FAMILY WILL ONLY BE ACHIEVED BY BARGAINING FROM A POSITION OF STRENGTH.

This process is slow. It is a grind. But we are committed to patience and persistence and the full utilization of our power to ensure your voice is heard and your interests are advanced. When Safeway “talks,” what’s really happening is that the Sobey family is telling you what to do. When Safeway “talks,” we will soon need their words to be drowned out by your shouts and demands for fairness.

Mr. Chollak ends his letter with “together, we are a family nurturing families.” Are you convinced that the Sobey family really cares about your family?

Alberta Safeway Employees: Union negotiations are continuing this week in Calgary. You are always welcome to attend. Contact your Union Labour Relations Officer for details.